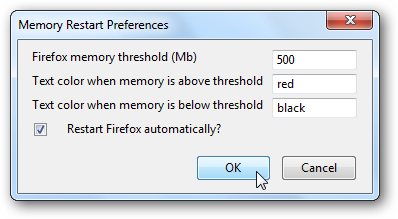 One of the biggest problems with older versions of Firefox was its relatively sluggish performance, which allowed lightweight browsers like Google Chrome and Opera to steal browser share. Things have improved greatly with the current release (version 5 at time of writing), but there’s still one major glitch that hampers Firefox’s performance, particularly over an extended period of time.

That glitch is what’s known as a memory leak – over time, Firefox’s memory demands increase, hogging valuable system resources and resulting in system performance degrading over time. Plans are afoot to plug this leak in a future release, but for now it’s up to you to remember to periodically shut down and restart Firefox to free up memory and improve performance across the board.

Thankfully, this is where Memory Restart comes in. This tiny little add-on is designed to show you Firefox’s memory usage in the Add-ons bar at the bottom of the Firefox window – when it reaches a critical level the add-on will display memory in red as opposed to black, alerting you to either restart Firefox yourself or have the add-on do it for you, freeing up memory and preserving all your open tabs in the process.

On the surface it’s a no brainer – the add-on even allows you to set your chosen threshold at which the alert is triggered or Firefox restarts. In practice, however, it’s not always 100 per cent accurate, reporting the memory usage is lower than is reported elsewhere. One workaround is to set a lower memory threshold than you think you’ll need.

Mozilla is taking steps to finally resolve this memory leak problem, but until it does, Memory Restart offers a neat solution to the problem of Firefox’s memory demands getting out of hand.

If you regularly find your computer’s performance slowing down after Firefox has been open for a long time, this add-on could prove useful.

Keep protected and maintain your privacy with this Firefox extension

Let developers and Mozilla know about problems with add-ons

Customize the Firefox button's menu to your precise tastes and requirements

Control the information your browser sends to web sites