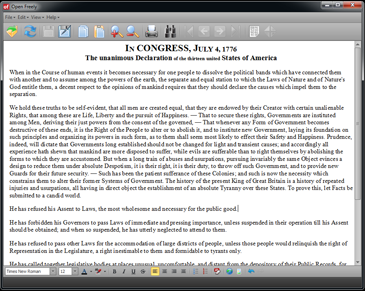 Open Freely is an ambitious program that not only allows you to open and view more than 100 common formats, but can also open and edit some of these.

Format support is much as you'd expect. So the program can open OpenOffice and Office documents, PDF files and many regular document formats (RTF and XML, for instance).

Unusually, you can also edit some of these, so in theory at least you can open a Word .DOCX file without Word, make changes and save the results.

Not bad at all for a free tool, then - but there are problems.

Format support isn't always the best. We opened some Word documents and quickly found a few that Open Freely wouldn't display properly. We're not sure that we would trust the program to edit and save anything complex.

Also, when you install Open Freely it installs the K-Lite Codec Pack (Standard), too. This may not always be a problem, but if you've got your codecs set up just the way you like then you may not appreciate someone silently installing such a huge update.

It doesn't always display complex Office documents properly, but then this is only Open Freely's first version. General file format support is good, and there are some neat extras, such as a resource editor which allows you to access the bitmaps and other resources in executable files.