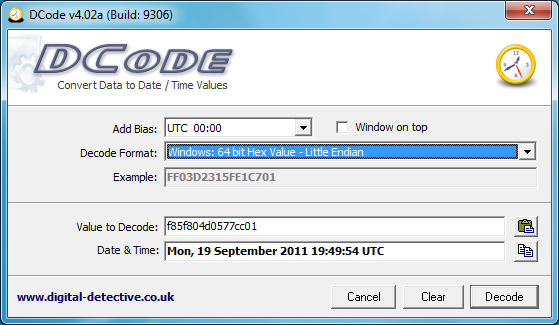 DCode is a portable tool which will convert various binary date/time formats into the actual date which they represent.

Why bother? Imagine you're browsing the Registry for some reason. You find a potentially useful key, like HKEY_LOCAL_MACHINE\SYSTEM\CurrentControlSet\Control\Windows\ShutdownTime, which tells you when the system was last shut down - but only in some unintelligible string of hex digits, like "f8 5f 80 4d 05 77 cc 01". Normally at this point you'd probably give up and move on, but DCode can take this kind of value and actually convert it into something meaningful.

DCode is one of those programs that you'll rarely ever need, but when you do, can be very useful. If you ever browse the Registry for any reason then it's worth the download.

Explore the innards of binary files- and more

Get the low-down on files, storage devices and RAM with this powerful hex editor