An easy-to-use and versatile Windows timer 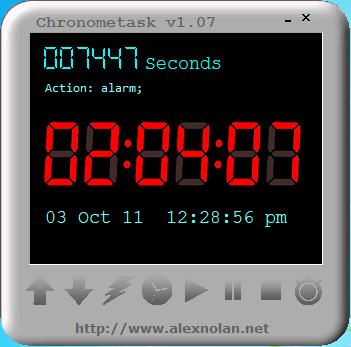 Chronometask is a useful timer which can perform an action after a specified period of time.

By default the program simply plays an audio alert (either the built-in sounds, or using your choice of file - as long as it's WAV format, anyway). So if you'd like to be reminded of something in 30 minutes, say, configure the timer accordingly and when the time is up you'll hear the alert.

You can also have the program perform other options, though: display a message, launch a program, open a browser window at a given URL, and log off, shut down or restart your PC.

Chronometask can also leave the timer running in a loop. So, say, having launched a program after an hour, it could also be launched again an hour later, without requiring any more configuration.

And there are other convenient touches dotted around the program. Would you like to time some on-screen activity, for instance? Chronometask can also be used as a stopwatch: click to start the timer, click again to stop it.

A well-presented timer with lots of useful features and functionality - and just for extra convenience it's portable, too

Get a reminder of important events with this simple free tool

Keep track of the time all over the world

Wake up to your favourite music every day of the week

Use your Mac to fall asleep and wake up

Design your own customised desktop alarm clock – for free!

Get a desktop alarm clock with a difference...

Run your PC’s clock faster than usual with Accelerify