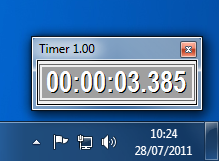 Timer is an amazingly compact portable utility (7.5KB) which works something like an on-screen stopwatch. Click in the window to start it, click again to stop: it's very easy to use.

Right-click the title bar and you'll find an option to copy the current time to the clipboard. And there's also an Options dialog which allows you to set the window to remain always on top of others, or to create a start/ stop hotkey, if you'd prefer to trigger the timer with a keyboard shortcut rather than a mouse click.

That's already more than enough for a 7.5KB program, you might think. But no, there's even a command line option. Launch it with the -go switch and the clock will start immediately, perhaps useful if you want to see how long it takes to run some batch file or script operation.

If there's one potential problem it's that the program is a little, well, old; the executable is dated 30th April 2000. And so there's a possibility that Timer may not run perfectly on some modern systems. From what we can see it's not relying on anything other than a few standard Windows calls, though, and as it worked very well on our test Windows 7 PC, we don't think it's likely that you'll run into any issues.

Timer is a surprisingly capable on-screen stopwatch, and is also one of the smallest useful utilities we've ever seen

Get a reminder of important events with this simple free tool

Track your running progress and improve your motivation to train

Use your Mac to fall asleep and wake up

An easy-to-use and versatile Windows timer

Enhance your iPhone's camera with this advanced photography app.

Track your cycling workouts with your iPhone

Get a desktop alarm clock with a difference...