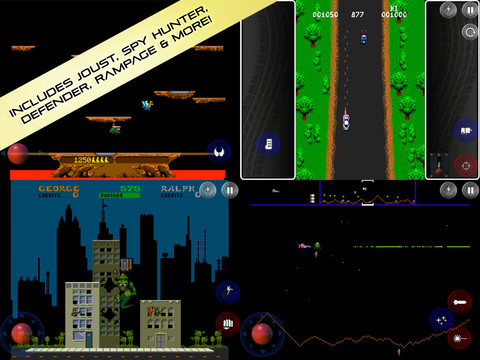 Gaming is bigger than ever and the number of mobile devices that now exist means that there are now increasing numbers of casual gamers. Not everyone wants to spend money on a console and new releases, but far more peoples are inclined to turn to their mobiles and tablets for a quick game here and there. Midway Arcade is a great option for anyone looking to relive their youth with a series of classic arcade games, but also a great option for anyone looking to enjoying gaming on a budget.

There is nothing here that is going to set the world on fire – the appeal of the arcade is one of nostalgia rather than the feeling of playing the latest and greatest games with the best graphics. But the way all of the games presented is instantly appealing. The six arcade games are featured in virtual copies of their original arcade cabinets, all of which are to be found in a 3D virtual arcade that you can walk around.

You have six famous titles to choose from - Spy Hunter, Rampage, Joust, Root Beer Tapper, Defender and Arch Rivals – but there are also four classic arcade games to take part in - Air Hockey, Arcade Basketball, Pool and Roll Ball. When you play these games you can win tokens that can be exchanged for prizes and no matter what you choose to play you can listen to the music you have in your iPod library.

Cheap and cheerful, Midway Acrade just goes to shows that games that rely on addictive gameplay can be just as appealing as those that take advantage of the latest technology. Whether you’re a kid, a kid at heart, or just yearn after your younger days, this low cost app is an excellent way to take a step back in time and experience gaming from another era. If you get bored of the bundled games, in-app purchases are available so you can download more!

A great selection of games at a great price, all presented in a nicely designed arcade interface.

Amazon’s ereader gives you access to your ebooks in iOS