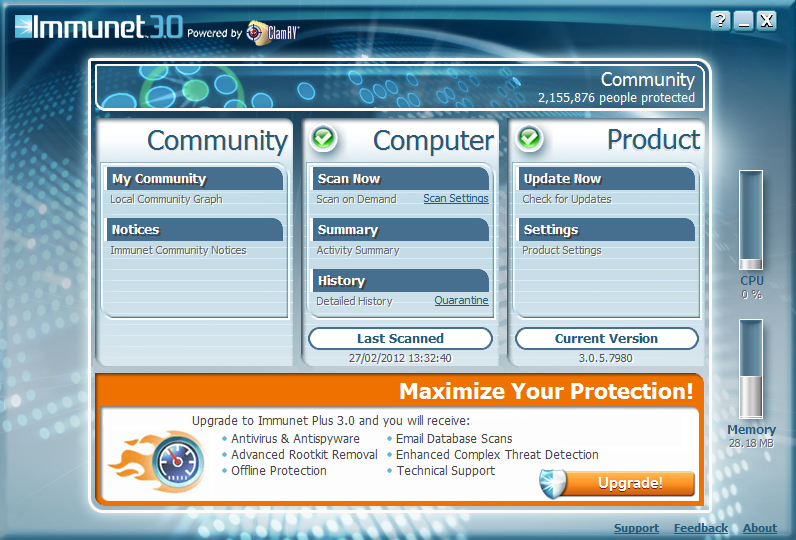 Immunet Antivirus is a simple cloud-based tool which can run alongside most antivirus packages to enhance your PCs security.

The program's cloud-based nature means it's very lightweight. Its two core processes typically consume under 14MB of RAM; even when scanning it peaked at around 16MB on our test PC, and of course, there are no bulky database updates to download. Immunet always uses the most up-to-date information from the cloud.

On the other hand, the free version of Immunet doesn't protect you when you're offline. It has plenty of other restrictions: no "advanced detection and removal" of malware, no scheduled scans, no "deep scans for archived and installer files"; no automatic cleaning of infected files, no "advanced packer support", no scanning of email databases.

And it's slow, too. Even when we chose the Flash Scan, which limited itself to checking running processes and the Registry, the program took around three and a half minutes to finish. We've seen other antivirus tools run basic system scans more quickly.

Still, Immunet is supposed to be run alongside another antivirus tool, not used on its own, so maybe these issues aren't quite as important. And perhaps the program's major selling point is its lightweight design. If you're looking for extra antivirus protection which won't slow you down then it just might be worth a look.

Immunet is basic, but ultra-lightweight and runs happily alongside many other antivirus packages, though, so if you're looking for a simple second layer of protection then it may be of interest.

- Added Credo. Credo is a ML engine that allows endpoint connector to extract feature print of a PE file and send to the cloud to see whether the file is malware or not.
- ScriptID engine allows AMP connector to analyze scripts prior to execution. It is based on the Windows Antimalware Scan Interface (AMSI). In 7.0.0 version of connector only PowerShell scripts are analyzed.

Manage all your web passwords in one place