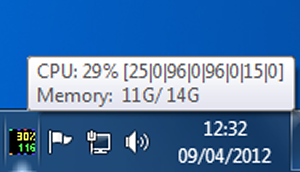 PTray is a tiny CPU and memory monitor with a couple of other mildly useful abilities.

Launch the program and it'll first display your CPU usage and free RAM in a system tray icon. Displaying two figures may sound like a good idea, but squeezing them both into an icon forces the tool to use a tiny font, so they look ugly and will be difficult to read if you're at all short-sighted.

Click the icon, though, and you'll see the program's second feature, as it asks Windows to reduce the RAM use of all your applications (it's using the SetProcessWorkingSetSize() API function, if you're interested). This isn't as big a deal as some people claim, because if you're running short of RAM then Windows will call the function itself, but there's no harm in having it available.

And the third PTray feature comes in its ability to configure your process priorities. This is also very basic; you have to set it up via an INI file, and the program only uses this to set priorities when it launches. Still, if you'd like to tweak the priority of a few background processes then this may be suitable, and PTray's simplicity does at least mean it's short on resource use, grabbing only around 1MB RAM itself.

PTray isn't a great CPU/ RAM monitor, but if you'll also use its RAM or process priority tools then it's probably worth a look.

Display live system stats on your taskbar with XMeters

CPUMon is a lightweight performance gadget