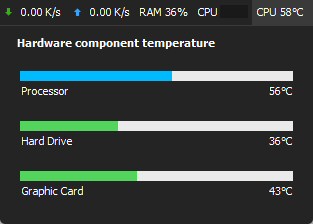 Wise System Monitor is a desktop gadget which tracks and displays real-time information about your PC.

There's no flashy interface, no analogue dials or anything similar, just a tiny grey bar with a couple of bars and various figures: CPU and RAM usage, upload speed, download speed and your CPU temperature.

This looks very basic, but clicking any of these areas opens a panel with more data. We saw which programs were uploading or downloading data; graphs of upload and download performance over time; tables showing the most RAM and CPU-hungry processes, and details of your CPU, hard drive and graphics card temperatures.

These aren't just static lists, either. If you decide you no longer need a particularly RAM-hungry program, hover your mouse cursor over its name, click the "X" to its right, and it'll be shut down.

Right-click the gadget bar, select More Details, and another window appears with a basic Task Manager-type tool and a simple system information panel. The latter might be useful occasionally (it has your local IP address, MAC addresses and so on) but for the most part can be safely ignored.

Wise System Monitor keeps on its improvements, and the newly released notes are as follows:

Wise Monitor looks very plain, but at least that means it doesn't waste resources, and overall it's an easy way to watch your internet speeds, CPU and RAM usage