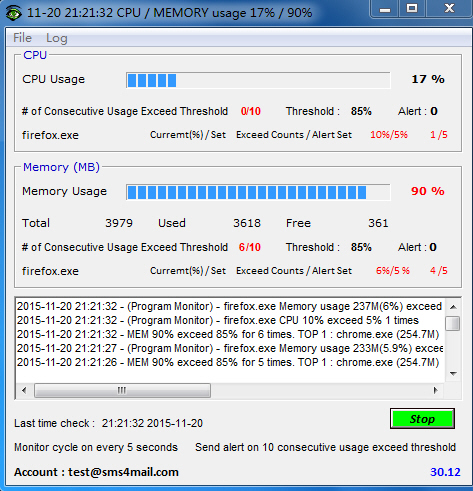 CPU Monitor and Alert is a free tool which can monitor CPU and memory usage, and take action if something's grabbing too many system resources.

Once running, double-clicking the program's system tray icon displays its main monitor. This looks very basic, but is functional enough, with bar charts displaying CPU and RAM use.

If you're not interested in watching this, minimise the window and the program continues to run in the background. High resource consumption is recorded in a log and you can review it later.

It's also possible to set up actions to be taken if your CPU or RAM usage passes a defined threshold. This could be just playing an audio alert, but there's also an option to forcibly close the offending process. (You have to provide the names of processes allowed to be closed, so there's minimal chance of killing anything important.)

There's also an option to send emails or SMS messages via SMS4Mail.com, but you'll need to purchase credits first (charges start at $10 for around 120 texts).

It doesn't make any real effort to display your resource usage, but if you just need something to warn you of RAM or CPU hogs, or automatically close the offending process, then CPU Monitor and Alert is worth a look.