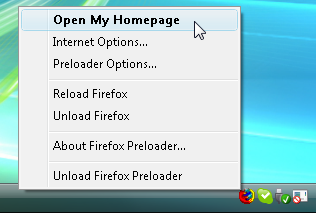 Firefox easily outperforms IE when processing JavaScript, rendering complex pages, managing multiple browser tabs and a whole lot more - but there's one notable exception: startup time. Most people will find Firefox takes far longer to launch than IE. On our test PC the first Firefox window took 7 seconds to appear, while IE only kept us waiting for just under a second.

The Firefox Preloader helps to address this problem by loading some Firefox components into memory before they're required. This means it'll consume a little RAM, just 6 or 7MB, but Firefox will then launch much more quickly as it won't have to load all its components from your hard drive. What sort of benefit might you see? Every system will be different, but on our test PC Firefox's first launch time fell from 7 seconds to around 1, a massive improvement that made the browser feel much snappier and more responsive.

By default the program keeps Firefox in RAM, though, even if you close it, so this will take up a rather larger chunk of memory (30 to 60MB, at least). If you can't spare the RAM then you can manually unload Firefox by choosing an option from the Preloader system tray menu, but of course you'll have to remember to do that each time.

Makes Firefox launch much faster than normal, but requires a little RAM to do its work

Print from Firefox without showing the Print dialog

Take control of your Gmail inbox with a Firefox extension