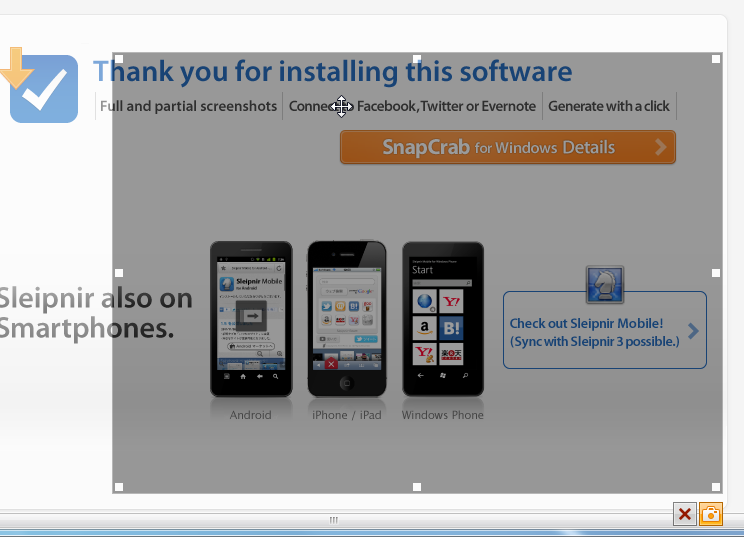 Screen capturing can be as simple as hitting the PrtScr key, but if you have slightly greater requirements you might start to look further afield to the likes of Windows’ Snipping Tool. This provides you with some extra options, but commercial programs such as SnagIt are far more advanced. The cutely named SnapCrab is a freeware alternative to SnagIt which includes many of the features and none of the cost.

This is an app that relies heavily on keyboard shortcuts and you can configure hotkeys for everything from capturing the entire desktop or a single window to posting image to Facebook or Twitter. Of course, there is also the option of capturing a section of your screen and all images are automatically saved using your preferred naming convention to the folder of your choice in PNG format. Support for transparency capture is nothing new, but there is the option of choosing to ignore any background image that might show through transparent section of a window.

Sharing images is a very nice touch, and it is something that SnapCrab handles very well. In addition to posting captures to your Facebook timeline or sharing via Twitter, you can also save images directly to your Evernote account. Whatever type of screen capture you are saving, the preview window helps you to ensure that you grab exactly what you intend to, and there is a timer function for setting up shots.

If you’re an Internet Explorer user, there’s also a browser toolbar that can be used to capture web pages, including entire pages that cannot be seen in one go – this scrolling capture is something that is sure to come in useful time and time again. Extra features include a color picker, image optimization and much more. This is a very impressive tool and one that could sway you away from the paid for alternatives.

Version 1.1.2 (Release Notes):
Fixed the issue that wrong area could have been captured on high DPI displays
Improved stability of Twitter authorization by adopting OAuth
Fixed some minor issues

A serious competitor to the likes of SnagIt, and much more powerful that the Snipping Tool – great stuff.

Find and install free apps on your Windows desktop

Capture screenshots at custom sizes with this handy portable app

Capture screenshots at custom sizes with this handy portable app