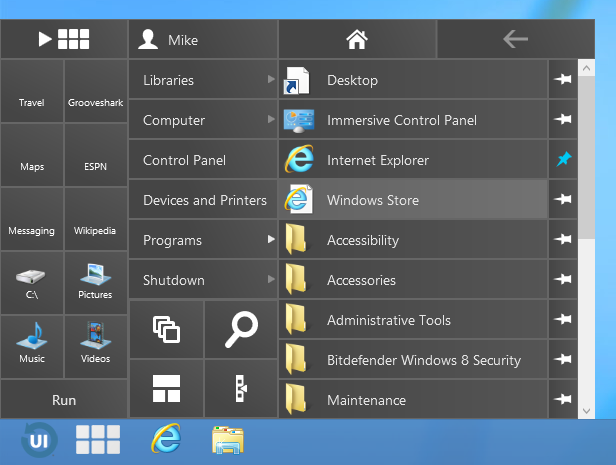 Windows 8 has a number of interface changes which can seem frustrating to some, but if you're not entirely happy with the new way of doing things, don't give up: RetroUI Pro may be able to help (for a price starting at $4.95, anyway).

Some of the program's features won't seem any great surprise. After installation the Start screen will appear only briefly before you boot to the desktop, for instance - there are now plenty of ways to do that (most of them free). And RetroUI Pro's reintroduction of the Start menu isn't exactly an original idea, either.

Take a look at the detail, though, and the picture begins to change. The RetroUI Pro Start menu isn't just a recreation of the old Windows 7 look, for instance. It's extended, in multiple ways (you can call up the Alt+Tab task switcher without touching the keyboard, for example).

Better still, RetroUI Pro does a huge amount to try and merge the Start screen and desktop into one environment. There are entries for your apps on the Start menu, for instance. If you switch to the Start screen then you'll still see the taskbar underneath. And you're actually able to run at least some apps in a resizeable window on your desktop.

And there's more. TabletView provides a grid-type interface which you can use to help organise your key apps, applications and documents, for instance. RetroUI supports multiple hotkeys to do various common things (F3 for Search, F4 to close a Metro app, and so on). And there are all kinds of configuration options on offer. So if you don't like the "hot corners" system, for instance - maybe you keep launching the charms bar by accident - you have the ability to disable it entirely.

The simpler areas of RetroUI Pro work fairly well. Yes, it does boot you to the desktop. You do get a Start menu back, and this is more powerful than many similar tools (you can display the Charms bar or Search tool with a click, for example).

When the program starts pushing the envelope, though, it becomes rather more unreliable. The RetroUI Start menu correctly displayed our installed Windows 8 apps, for instance, but it wouldn't launch any of them. We pointed, clicked - nothing happened at all.

And while we were able to resize a Windows 8 app, running it in a window on our desktop, this also didn't work out as expected. If we moved away from the app, clicked the desktop or some other desktop program (an instance of Notepad, say), then the app would disappear entirely. Alt+Tab would bring it back, but full-screen, so to restore the window we'd have to manually resize it again.

For all this, we still liked RetroUI. Its Start menu worked well, for example, and we liked having the taskbar available beneath our Start screen. The program isn't as good at manipulating Windows 8 apps, but it could still be worth its asking price, and if any of these features appeal to you then we'd definitely recommend you take the 7-day trial version for a spin.

RetroUI Pro adds several interesting features to Windows 8. Several either don't work or are virtually unusable, but there's still more than enough to justify the program's reasonable asking price ($4.95 for home use)

Add sidebar gadgets back into Windows 8