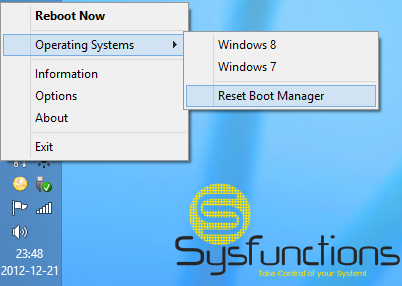 If you've installed multiple operating systems on a PC then normally you'll have to choose the one you need each time from a boot menu.

Install Reboot-To and it'll add an icon to your system tray. If you need to reboot after that, right-click the icon, select Reboot > Operating System, choose one of your installed operating systems - Window Vista, Windows 7, Windows 8, Windows Server 2008 R2, Windows Server 2012, Ubuntu (wubi) and Ubuntu Server (wubi) are supported - and it'll reboot directly into that OS - the boot menu won't appear.

Reboot-To is a little more intrusive than we'd like, adding two background processes to our test PC: one for the user interface, another for a Windows service. These are extremely lightweight, generally consuming less than 2MB RAM on our test PC, but we're not entirely sure why they're required at all.

Allowing a program to play around with our system's BCD (Boot Configuration Data) files makes us a little queasy, too. It's carrying out a very simple and defined task, and there shouldn't be any problems, ever, but we'd still recommend that you have a Windows recovery disc to hand, just in case.

That aside, though, Reboot-To works very well, and if you're regularly booting between various Windows installations then it could save you some time and hassle.

Reboot-To's background processes are a minor annoyance, but the program does provide an easy way to reboot between various Windows installations

Related Downloads Other Downloads From This Category
AlomWare Reset 4.02

Quickly refresh your PC, without needing to reboot

Reboot, shut down or wake up any or all of the systems on your network

AlomWare Reset: for when rebooting is just too slow

Reboot, shut down or wake up any system on your network with RemoteRebootX