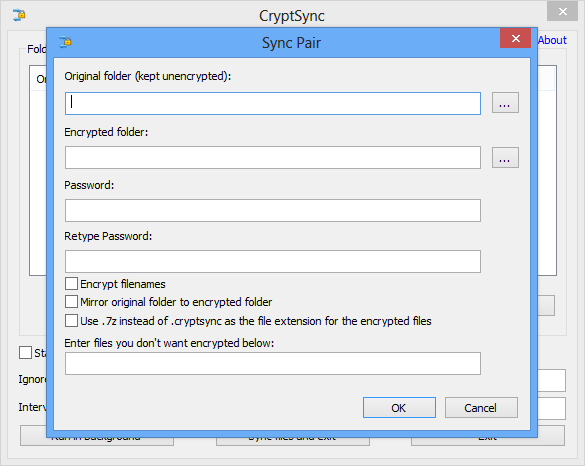 CryptSync is a simple tool which synchronises two folders, while encrypting everything in the destination.

Point the program at your Documents folder, say, and you could have it create an encrypted folder on an external drive. Then, whenever you save a new file to \Documents, it'll be saved in an encrypted form. (CryptSync uses 7-Zip to carry out the encryption, which means you also get file compression thrown in.) And you can set up as many folder pairs as you need.

Perhaps a more interesting use of CryptSync, though, is to encrypt the data you're uploading to services like SkyDrive, DropBox or Google Drive.

To make this work you would create a source folder to hold the unencrypted data, selecting a cloud storage folder as the destination.

Whenever files are copied or saved to your CryptSync source, they'll be encrypted in the cloud storage folder, and uploaded.

And the sync works in both directions, too, so if a file is changed in the cloud storage folder then it'll be decrypted and updated in the source.

This scheme does introduce some obvious complications. In particular, if your cloud files are encrypted then you can no longer access them from any device or browser; you'll need a decryption tool to hand.

But if you're just working on one or two PCs then this shouldn't be an issue, and on balance CryptSync could provide a useful extra layer of protection for your data.

A simple but effective file sync and encryption tool

Increase the safety of connections to web sites by encrypting them

Increase the safety of connections to web sites by encrypting them