Recover data from optical discs (and other media) 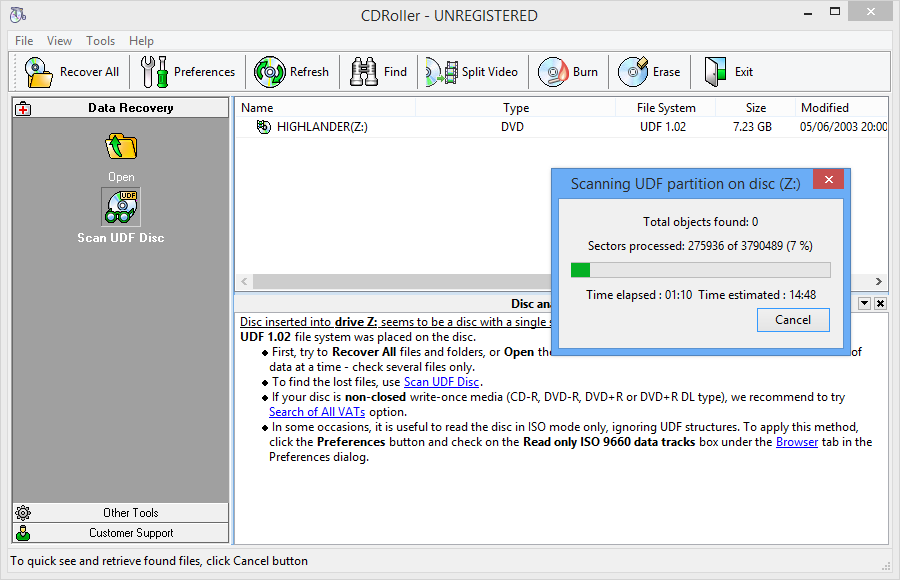 Data recovery is a frightening prospect, but these days it’s possible to recover lost and deleted files from hard drives for little or no cost thanks to software like Recuva. But when it comes to recovering data from CDs, DVDs and other optical media, while the likes of Recuva are starting to dip their toes into this area, you’re still often better served with a dedicated tool.

CDRoller is one of the better known tools for recovering data from corrupt optical media. The good news is that you don’t have to pay a penny upfront either – the function-limited demo will show you exactly what it can recover before asking you to pay up. You can then decide if the data on the disc is worth the reasonable $39 one-off fee.

CDRoller promises to give you access to all kinds of optical discs, from unfinalized CDs to DVD video. It also offers standard data recovery tools for hard drives and other media too, but its main appeal will be to those looking to recover data from CDs, DVDs and Blu-ray discs.

The tool bypasses the standard drivers to attempt to access the raw data on the disc, which may work with some harder to access discs. However, we found it unable to access a damaged disc that rival data recovery tool ISOBuster was able to read successfully.

The user interface is reasonably intuitive – once the drive has been scanned, you’ll see some information guiding you towards recovering data. Then it’s a case of double-clicking the drive to view its contents. If the data you’re looking for isn’t present, click Scan UDF Disc and CDRoller will attempt to locate it.

Once you’ve found your missing data, you can then attempt to recover it – the trial version won’t save anything, but it will scan the files and let you know if they’re readable and recoverable, so giving you the choice of whether or not to shell out for the full version.

CDRoller is a capable enough tool for data recovery, but it’s worth trying ISOBuster first, particularly if CDRoller isn’t able to read the disc in the first place. ISOBuster also offers some limited free recovery tools, but if it’s unable to help, then CDRoller is worth checking out.

- This version introduces the new free options of CDRoller: Create spare files and Repair file. These options are now located in the File menu of program window. Spare files contain error-correction data based on Reed-Solomon algorithm that can be used to verify your valuable files have not been damaged and fix them if necessary. For example, if you have a valuable file on the expensive high-capacity Blu-ray disc (BD-R Quadruple Layer or Ultra HD Blu-ray), even a small damaged area can make a large backup file non-functional. A possible solution is to create spare files while your backup is still readable, keep them in the safe place or write onto new CD or DVD using Burn option of CDRoller. Further, you can recover files with the help of Recover... and Repair file options, using spare files created before.
- Numerous improvements, bugfixes and workarounds added.

Although it's branching out into general forms of data recovery, CDRoller will appeal to those looking to recover data from optical discs. If ISOBuster doesn't work, this might prove a life-saver.

Recover video or audio files from scratched CDs or DVDs

Recover data from scratched or damaged CD, DVD and Blu-ray discs with this easy-to-use tool