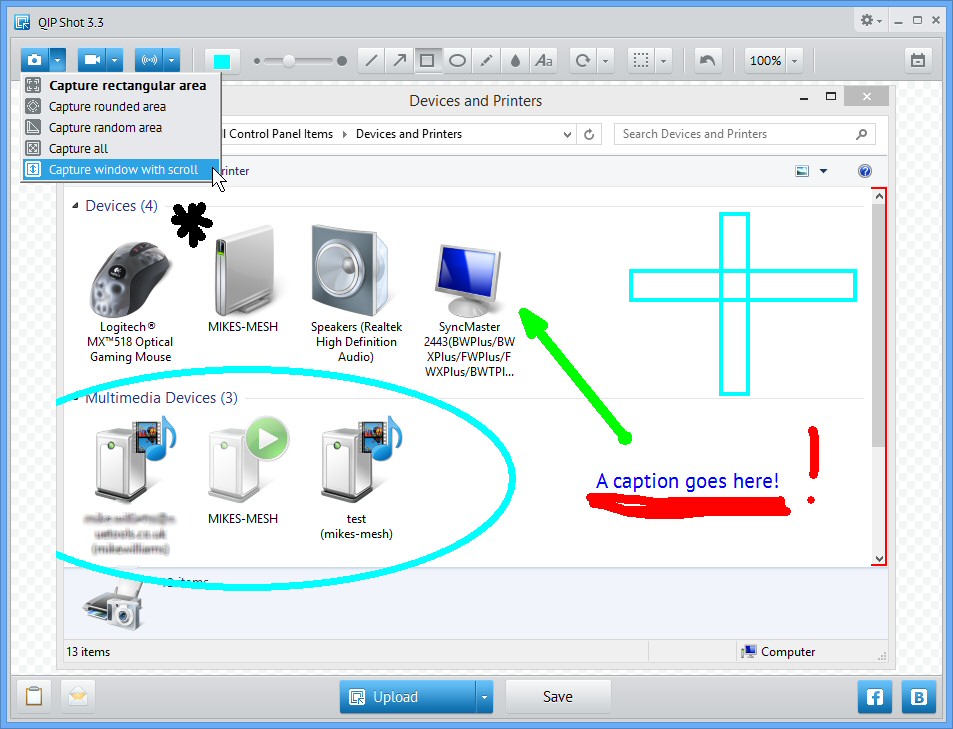 QIP Shot is a capable free screen capture tool with some interesting features.

As usual, you're able to capture the full screen, active window and a freehand rectangle. There's also support for capturing an ellipse, a freehand area or a scrolling window. And QIP Shot can also record all or a part of your screen, saving the results as an AVI video.

An editor has various tools for annotating your image (line, arrow, rectangle, ellipse, pencil, text and blur), as well as rotate, mirror, crop and other options. It's a bitmap, rather than a vector editor, so you can't move or edit your annotations later, but it's fine for basic use.

When you're happy QIP Shot will save your image locally, upload it to Facebook, VK, or its own shot.qip.ru/ photos.qip.ru. A browser window opens to display your capture, showing it's worked correctly, and giving you a link to share with others.

A Broadcast tool gives you even more sharing options, broadcasting part or all of your screen via Justin.tv, CyberGame.tv, Ustream and more.

Version 3.4 changes:
•  Support for the publication of photos and videos to Classmates
•  Avtopodgruzka stories in the main window when it reaches the bottom of the scroll
•  The possibility of placing the social buttons in the drop-down menu button "publish"
•  Implemented a valid user log off when you reset the authorization data in the social plug-ins from the settings menu
•  Improved work with the tool "selection" at a small scale

QIP Shot is easy to use and configurable, with a good range of capture types and one or two unusual features (screen recording, broadcasting). We wish it had a vector, rather than a bitmap editor, but otherwise it's a useful screen capture tool.