Boot PCs from an image on your network 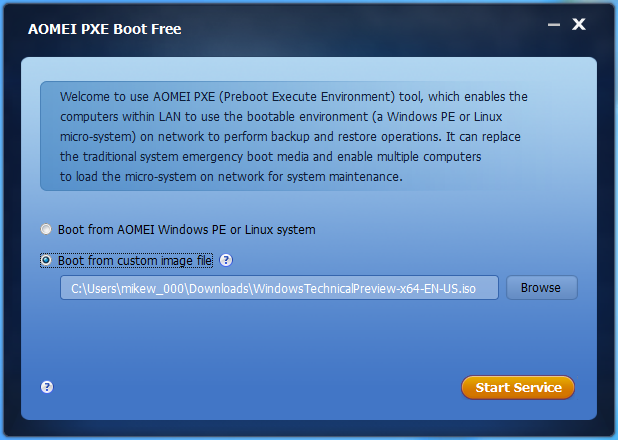 To use it, you must first install AOMEI PXE Boot Free on a central computer in your network. Point the program at your ISO image (a recovery disc, Linux distro, whatever you like), start its service, and that's it: your preparations are complete.

Now, if you need to start a computer from your recovery environment, you no longer have to find the right disc/ USB key. The system doesn't even need a working disc drive or USB port. Simply switch it to "Network boot" in the BIOS, and as long as it's on the same network as the AOMEI PXE Boot Free computer, it should boot from your source image.

One limitation of AOMEI PXE Boot Free is that it doesn't currently work with UEFI PCs, unless you include a bootable WIM image.

If you can live with that, it's a very straightforward tool, easy to use and with a fair amount of documentation to help you get it working properly.

AOMEI PXE Boot Free is easy to use and works well with BIOS-based PCs.