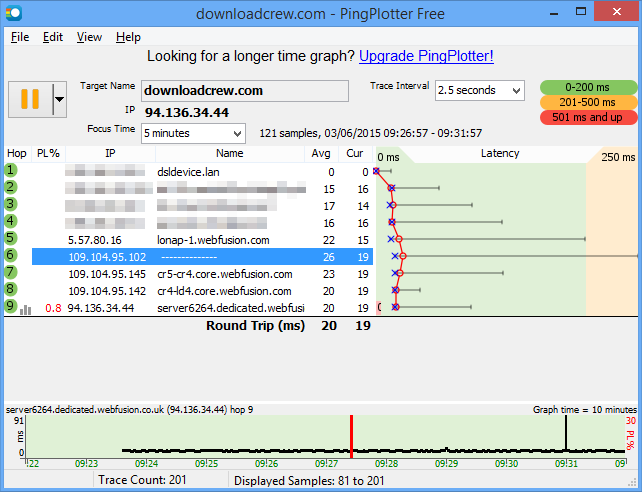 PingPlotter Free is a graphical traceroute and ping tool.

A straightforward interface means you'll be using the program right away. Enter a target computer or domain name, optionally choose a trace interval (15 options ranging from 1 second to 60 minutes), click Start and you're off.

PingPlotter Free then repeats this process after whatever trace interval you've specified, displaying a graph of the average response time and range for each hop, along with a separate timeline which plots your round trip time for the last ten minutes.

The table and graph can be customised in various ways (figures displayed, graph colour, more), and when you're happy the image or figures may be copied to the clipboard for easy sharing.

The developer produces two commercial versions of the program with many more features, both of which can be sampled during the 30 day trial before it reverts to the free build. The Free version includes a 10 minute history graph plus a limited feature-set, such as the facility to measure latency and packet loss and trace with ICMP packets.

PingPlotter Standard ($39.99) extends your monitoring history to 48 hours, allows tracing by TCP or UDP packets as well as ICMP, offers customisable alerts to warn you of problems, and more.

It's not going to change your world, but PingPlotter Free is a likeable network monitor, easy to use and with a clear and informative display.

Run Ping, Traceroute, Whois and more with this portable collection of network tools

Move up to Windows 10 Professional for just $39.99 and tap into the benefits of Hyper-V virtualization