Will that EXE run on your PC? 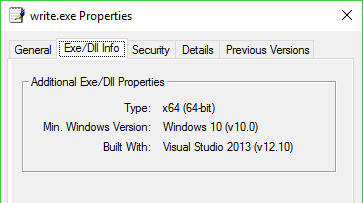 ExeProperties is a free tool which tells you more about the requirements of EXE or DLL files, helping you see if they'll run on your (or any other) system.

The program integrates with Explorer, and has no interface of its own. Install it, right-click an EXE or DLL file and click the new "Exe/DLL Info" tab for more information.

"Min. Windows Version" lists the minimum Windows version required for the executable to run. The application may need some later version, depending on its design and other components, but it still gives you a general idea. (A program with a "Min. Windows Version" of Windows 7 might actually require Windows 8 or 10, but at least you'll know it's not going to run on XP or Vista.)

The "Built With" entry displays the version number of the tool used to build the EXE. If you're not a developer (or even if you are, probably) this can safely be ignored, as it doesn't tell you anything very useful.

It's not always important to know whether a program is 32 or 64-bit, or what its target Windows version might be, and if there's a problem the application will often tell you itself ("you can't run me on a 32-bit system", "Windows 7 or later required", etc). But if you're regularly downloading and trying out new software, ExeProperties provides an easy way of checking its 32/64-bitness and minimum Windows version, without ever getting in your way.

Uncover the innards of executable files with this powerful programmer's tool

Log executable files as they're created on your system