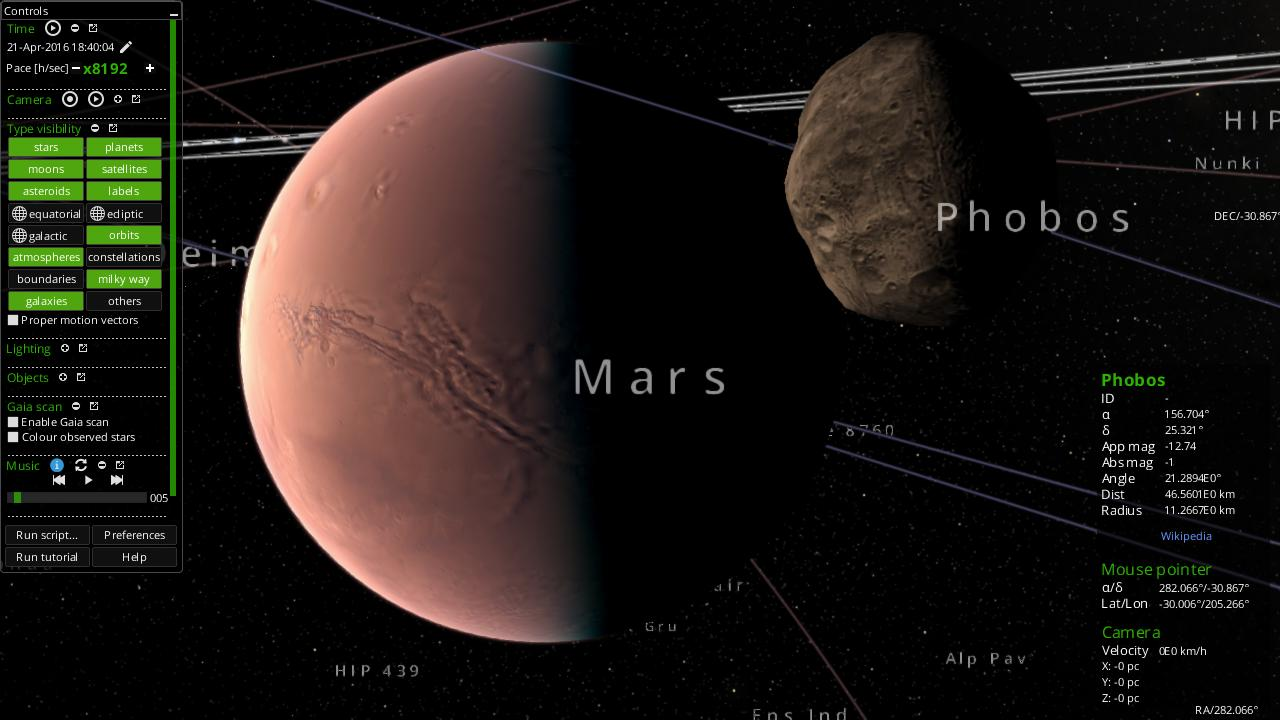 Gaia Sky is what the developer calls a "real-time, 3D, astronomy visualisation" package. Which essentially means it's one of those programs where you can fly around in deep space, exploring real imagery of planets, stars and more.

The program opens with its graphics settings. You can choose to run Gaia Sky full screen, in a fixed-size or resizable window. That works for us, although some of the other settings are a little advanced. Which "anti-aliasing" option would you prefer: FXAA, NFAA, MXAA X2...?

We opted for what seemed like high quality settings, and waited for the application to load. And waited, and waited, and waited. But eventually it appeared with an impressive visualisation of Earth, and we were able to click, drag and spin the mouse wheel to move and zoom around.

Navigation doesn't always work as you expect, but start to explore and you'll find answers. Click, drag and release, for instance, and Earth continued to spin in our viewpoint. How could we stop this? Easy: just left-click anywhere.

Gaia Sky doesn't initially display captions for astral objects, either, so there's no obvious way to tell where you are, or where you're going. But click "labels" in the "Controls" panel and captions appear.

There's an even easier way to find stellar objects, and surprisingly you know it already: it's the usual Ctrl+F shortcut. Press Ctrl+F, type Mars, press Enter and your view will point in the direction of Mars. If it's out of sight you can spin the mouse wheel to zoom in, or press Ctrl+G to jump straight there.

There are plenty of configuration options, especially for the graphics. You're able to tweak star brightness, size, ambient light, add a motion blur effect, a lens flare, even display your view in 3D (in theory, anyway- this crashed on our PC).

Once you know what you're doing, it's possible to record and play your paths, allowing others to see how you've flown around the galaxy.

Gaia Sky can even be extended with Python scripts. You don't have to understand how these work to find them useful. As an example, click Run Script..., select goto-test.py and click Run. Gaia Sky smoothly moves your view to our Sun, displays a message, moves to the Earth and repeats.

Gaia Sky can't compete with the imagery of Microsoft Sky, and it's not as easy to use, either. But there is value here, with plenty of configuration options, camera recording and scripting support. Worth a look for astronomy fans who want more than pretty pictures.

KStars shows the night sky, now or in the future, with plenty of information on what's out there.

Quickly discover just where all your hard drive space has gone