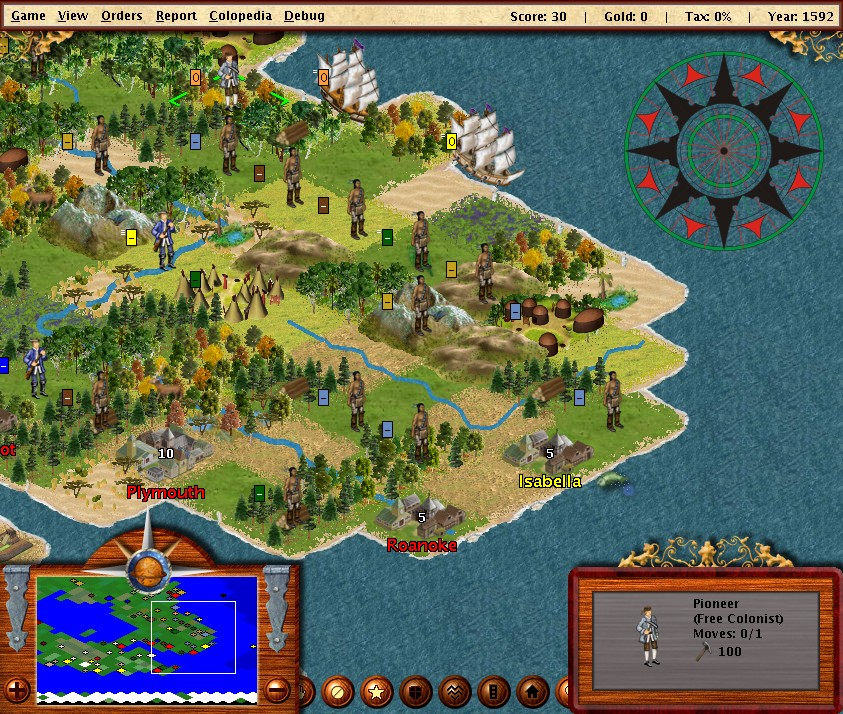 The story starts in 1492. You lead a tiny band of settlers who've just arrived in America, with just one goal: to make the country your own. But these are challenging times. You'll need to earn money by producing goods and sending them back to Europe. There are cities to build and manage, and new technologies to learn. And there's another complication: you're not alone.

Other European powers are building colonies of their own, expanding their borders and becoming all too powerful. War can't be too far away.

And then there are the native Americans. Will you become their friends, learn new skills and trade with them? Or attack their villages and take what they have by force? It's your call.

The ultimate objective is to become powerful enough to declare your independence from Europe. The King won't like it, and an attack force will be sent, but if you've prepared well, and are strong enough to defeat it, then congratulations are due - you've won the game. And now you've mastered the basics, you can try the multiplayer features, and pit your skills against other players.

- The autosave directory now follows the save directory if it changes.
- New warning that distinguishes approaching colony food exhaustion from actual ongoing starvation.
- Lots of tweaks to the compact colony report.
- Better tool tips on the trade report.
- Added a link to the FreeCol manual on the About panel.
- All cargo (more than 100 units) can be dragged with the control key, contributed by Fenyo.
- Native settlements have roads as in Col1 (confirmation from Fenyo).
- Number of goods on a carrier is shown in InfoPanel at lower right, full stacks have bigger icons instead IR#157, PF#44.
- Active unit cargo should be selected by default when entering a colony IR#22.
- Terrain bonus does not apply to settlement defence PF#73.
- Coronado only reveals minimal colonies in classic mode PF#83.

FreeCol is a Java project, which means performance is below average, but this remains a compelling and addictive strategy game