Create your own appealing 3D games, no programming knowledge required 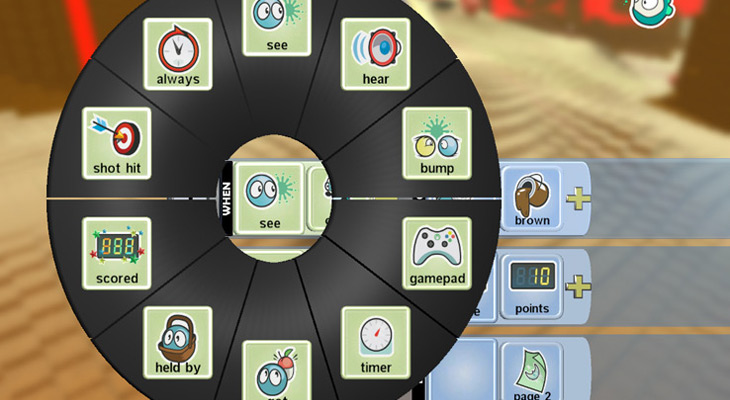 Creating your own games normally requires expensive software, in-depth knowledge of C++, years of spare time and a brain the size of a planet. But, Microsoft's FUSE Labs say, there is an alternative. Their Kodu Game Lab is so simple even a child can use it, and the results are attractive 3D games that are playable on both the PC and Xbox 360.

Kodu is certainly very easy to use. A terrain editor brings point-and-click simplicity to the task of creating your game world. And you can then add a range of characters and objects: a flying saucer, balloon, jet, blimp, cannon, clouds, buildings, rocks, stars, coins and more.

There are no boring text-based lists here, either. Kodu uses control wheels that graphically display all the options available at any one time. And it all works with mouse clicks, so you'll quickly feel at home.

This can, obviously, build into something quite complex, but it's reasonably easy to set up - most of the time you're just choosing icons, there's no text editing involved. All you really need is patience and a little imagination.

And if you have any problems creating games of your own, then don't worry, you can always load a sample game instead. There are plenty of examples and tutorials available, which you can then customise as you like. Though beware, many (though not all) of these need game controllers, and you can't play them with a mouse alone.

- Add MaxHealth, BlipDamage, and MissileDamage tiles.
- Updated Damage and Heal tiles to support full range of scores for their values rather than just numbers.
- Change OnWater and OnTerrain tiles to both return false when the character is jumping.
- World and private scores can now appear in Say commands much like the color scores can.
- Add new settings slider tiles from controlling BlipReloadTime, BlipRange, MissileReloadTime, MissileRange, CloseByRange, FarAwayRange, and HearingRange.
- Accented characters in Spanish now work properly with the Spanish keyboard.
- Micro:bit 1.5 is now supported!
- The edit/run cycle of complex levels should now be faster.

Kodu is an interesting and capable game creator. The finished results are understandably limited, but it's fun to use, and if you'd to teach your kids some programming basics then this is a very good place to start

Code for Windows, Android, iOS with this free IDE