Pit your wits against formidable enemies in this high def shooter 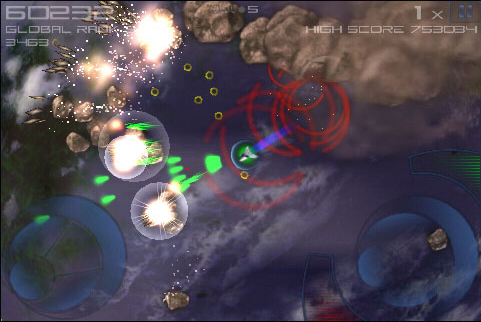 Meteor Blitz HD is an iPad port of popular iPhone games which sees you travelling through a variety of different worlds, shooting enemies out of the sky with a range of upgradable weapons. Using a flamethrower, gravity gun, ice cannon and more, the game is a real test of reaction time.

As you would expect from a top down shooter, Meteor Blitz HD is blessed with explosion aplenty, all delivered in striking high definition graphics. With two game modes to choose from, survival and arcade, you can test your skills against yourself, or see how your fare against other players from around the world.

The global leaderboard updates as you play in real time and the action is accompanied by a powerful techno soundtrack. Like all the best shooters, weapon upgrades are available so you can transform your ship into a formidable attacking machine.

Controls and gameplay are easy to learn and there are a number of nice touches - such as the way the game paused as soon as you let go of the controls. The relentless pace of the game will keep you coming back for more as you strive to reach that illusive highscore.

A wonderfully well-executed shooter which is sure to keep you hooked.

Quickly identify large files and folders on your hard drive

Battle your way through space in this sci-fi shooter