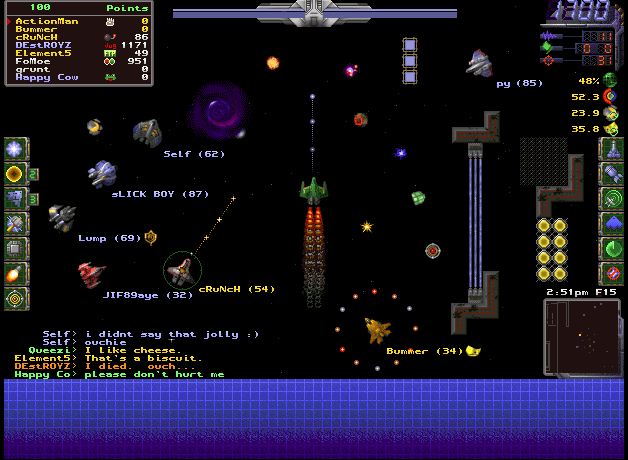 Continuum is a top-down view space shooter, that at first looks a little like an old-style arcade game. But don't be fooled. You're not competing with a single, feeble computer-based player. Rather, you'll be browsing the high resolution depths of space, and fighting for power-ups with hundreds of real-life human opponents, because Continuum is one of the best free multiplayer space games around.

Initially, as with most multiplayer games, life will be hard. You start with a relatively feeble ship, and will come up against experienced enemies with more firepower, maneuverability and special weapons. Get ready to be turned into space dust plenty of times before you've figured out how everything works.

Once you've mastered the controls, though, and found a few power-ups to increase your ships capabilities, you'll have more time to explore this new world. You can also form or be assigned to teams, which means everyone gains when they or another teammate collects a power-up. And an on-screen chat system lets you communicate with everyone, make plans with your team, taunt your enemies, and generally get more involved in the game.

To add a little extra variation, Continuum is divided into many different zones, each of which have their own goals and levels of difficulty. It's usually best to start in Alpha West, the newbie zone where you'll get a better chance to learn the basics before people show up and start shooting. But then you can move on to other zones, try more team games, complete "capture the flag"-type goals, one-on-one duels, and more.

It takes a while to learn the Continuum basics, so be prepared to die. A lot. Persevere, though, and you'll find a fun and addictive game

Guide your balls through challenging mazes - or create your own

Pit your wits against formidable enemies in this high def shooter