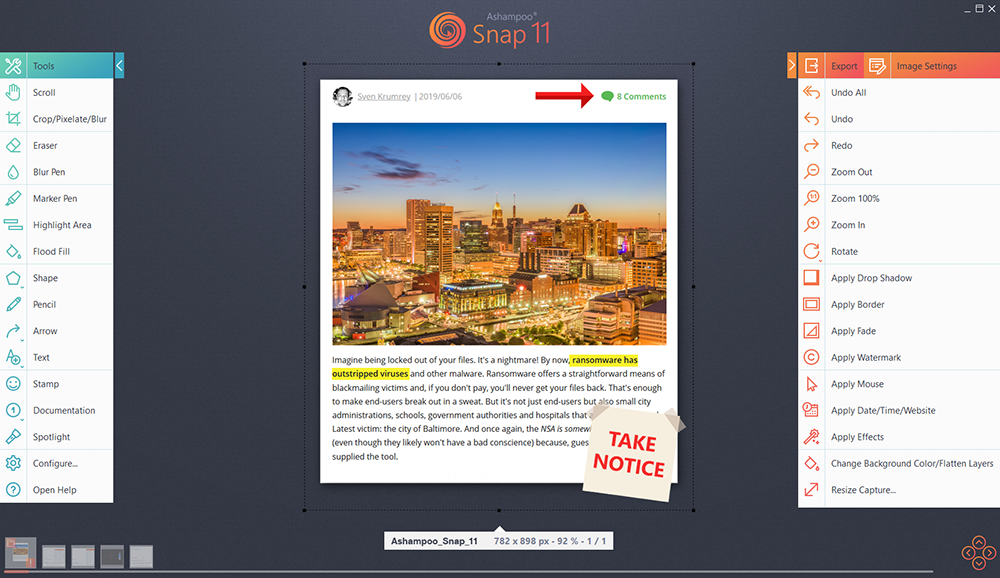 There are a number of reasons why you might want to take a picture of the contents of your desktop. Such images can be useful when putting together a web site, creating tutorials, demos or manuals, or just to record something for posterity. Windows makes it easy to create simple screen captures by simply pressing the Prt Scr key, but Ashampoo Snap opens up a number of new options.

As well as capturing precisely what you see on screen at any given moment, Snap can also be used to capture timed shots from within games. These screen captures can then be joined together to create a video. Recording can be paused and resumed at any time so you can compose your screen so everything looks exactly as you would like it to.

Snap can be used with a multi-monitor setup so huge screen captures can be created as easily as capturing a single window. If you would like to highlight a particular area of a screen capture, resizable shapes, text and other graphics can be added.

There will be circumstances in which it is not possible to compose your screen to show everything you would like to include in a screen capture - such as when working with a lengthy web site. Snap enables you to perform scrolling captures so such lengthy documents can be captured in more process rather than having to manually stitch together numerous images.

With the ability to capture non-standard shaped portion of the screen, the option of adding voice over recordings to your video captures and support for a range of video codecs, Ashampoo Snap is one of the most versatile screen capture tools available at such as great price.

Everything you would expect from a screen capture tool, and more, and all at an incredibly low price.

Capture stills from videos playing on your Mac