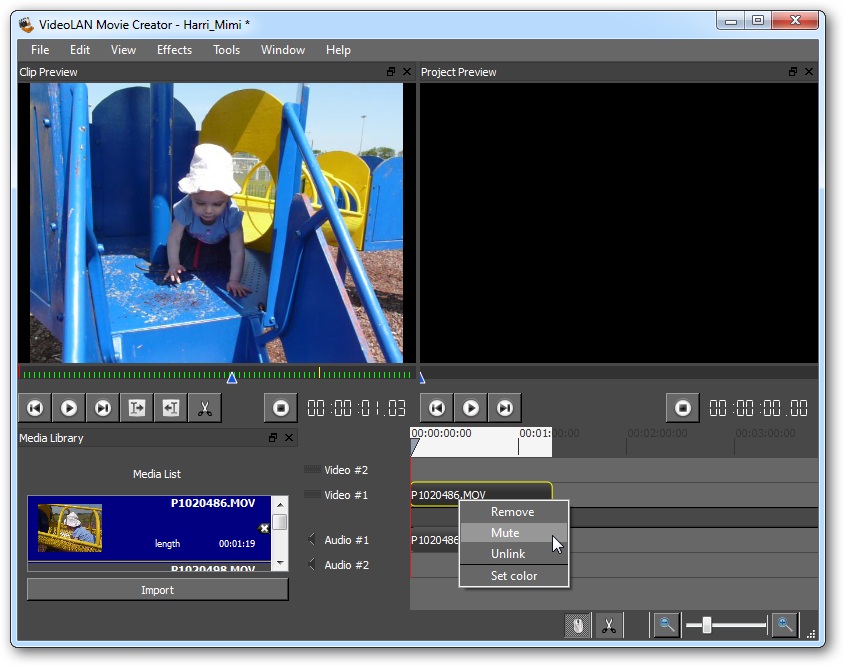 It’s safe to say that VLC Media Player revolutionised watching video on your computer: it was capable of playing a wide variety of different formats – including DVD video, enabling end users to ditch the three or four proprietary players required to access all common video content out there.

Now the makers have turned their attention to creating a video-editing tool in the same vein. This is an incredibly early release – described as “pre-alpha” by the developers – and as such many features are completely missing or incredibly unstable – by way of example, on launching it for the first time we were told the program was in crash-recovery mode, although it subsequently launched without a hitch.

The program launches with a short wizard: give your project a name and description, change the default directory it’s stored in if desired and then pick your video resolution (including HD) and audio output settings before starting proper.

Then it’s a case of importing the clips you wish to use before pasting them all together on the storyboard. As you’d expect, clips can be trimmed, laid next to each other and even overlaid, with the original soundtrack muted in favour of an audio track. Sadly, attempting to render anything resulted in the program crashing – this could be down to a number of factors: the original file format, output video settings and so on.

What’s clear is that at this early stage the program is largely a curio only. Consequently, VideoLAN Movie Creator is not for the casual user; however, video enthusiasts should definitely take a closer look at this early stage and get involved with helping to develop this promising product even further.

This incredibly early version is only worth checking out if you’re curious to see what might help. Early signs are promising, but it’s still hugely unstable – one for the enthusiast only.

Pre-Alpha release.
26 October 2010 14:28, Indy Jones
Hasn't reached beta version yet.Crashes often.Hopefully once its complete it is as good an editor is as they make the VLC Media player.Looks good,but not one for your collection just yet.
Related Downloads Other Downloads From This Category

Play a wide variety of video formats on your iOS device

A free video editor that does not compromise on features

A free video editor that does not compromise on features