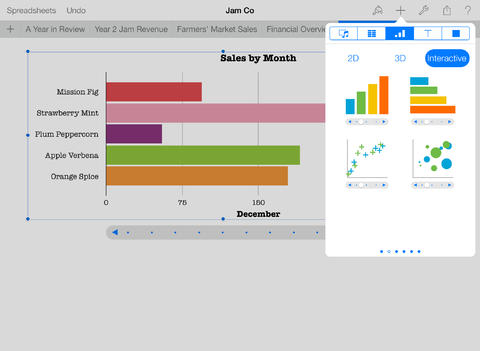 Apple's iWork office suite is a popular and powerful piece of software for OS X, and the company has made an impressive effort of porting the app to the iOS platform. Numbers is a spreadsheet that can be used to view, edit and create documents, either from scratch or by using any of the 16 specially designed templates.

Numbers was initially released as an iPad app, but sinc becoming a universal app, it is now also available for iPhone and iPod. You might think that working with a spreadsheet on such a small screen would be problematic, and as times it is. It can be difficult to select the cell you want to work with without accidentally resizing a column or selecting several cells at once. However, Smart Zoom enables you to focus on text while you are typing, and the document as a while when you stop.

Documents can be created and saved in a variety of formats including Numbers own native format, Excel and PDF. As will Pages and Keynote, the files you create can be easily shared with others via email and printed our using AirPrint, but it can be a pain transferring files to an from your Mac or PC or your iOS device.

As you would expect from a spreadsheet, Numbers for iOS includes a large number of built in formulae and functions that can be used to perform complex calculations. To make it easier to make sense of figures, the option to create charts and graphs is available. iPad users definitely get the better deal here, but even iPhone users can furnish their device with a tremendously capable spreadsheet.

This update adds a number keyboard for iPad, reduces the need to switch keyboards while entering data, and includes other usability improvements.

Cell selection can be a little tricky on smaller screened iOS devices, but apart from that, this is a great spreadsheet app for iOS.