The dark world of Liberty City comes to iOS 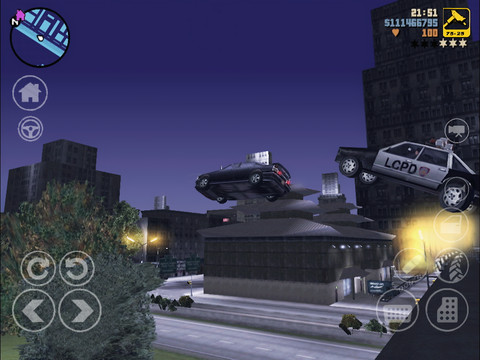 The game really needs little, if any introduction – it has been part of gaming culture for ten years now. You work your way through Liberty City, which you are free to explore in all of its seediness, fighting the mob and stealing the occasional car along the way. With ability to roam around both on foot and in an array of vehicles, there’s plenty to keep you busy for hours.

The graphics are undeniably brilliant, and it is staggering to think that this is a game once chained to consoles such as the PS2. One of the most obvious obstacles that game developers have to overcome when it comes to porting games to iOS is that there are no buttons to use for controls. GTA III’s onscreen control system is well thought out – if a little cramped on the iPhone – and you quickly get used to the lack of a game pad.

While the game can be installed on any iOS device running 4.3 or higher, the experience on older hardware – such as the original iPad or older iPhones – is less than wonderful. But played on more recent iOS devices, this is one of those games that reaffirms the idea that the iPhone and iPad should be considered serious gaming platforms.

A sterling translation of a classic game - iPad owners are in for a particular treat.

Amazon’s ereader gives you access to your ebooks in iOS