Test your strategic skills with this simple but engrossing game 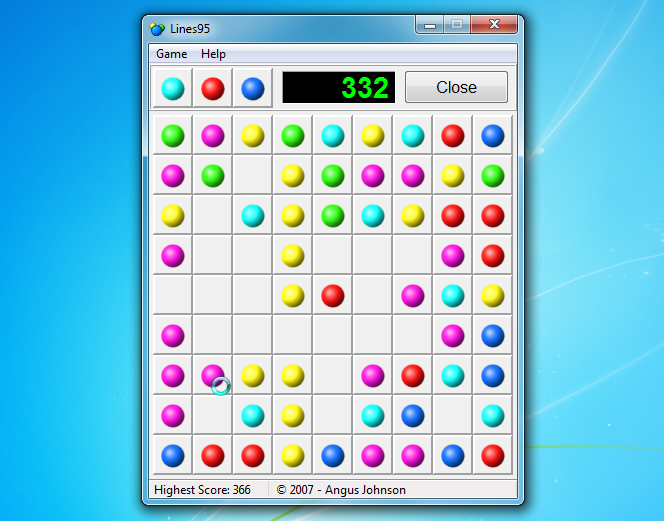 Lines95 is a lightweight clone of the Colour Lines game, where you score points by lining up five balls of the same colour (something like Tetris meets Connect 4).

The game starts on a simple grid. You have three coloured balls, and you can move any one of these to any other position on the grid with a couple of clicks.

Next, three new balls are added at a random position, and you can move any of these in the same way.

The idea is to create a line - horizontal, vertical or diagonal - containing five or more balls of the same colour. If you do that, you score points, the balls are removed, and you get another go immediately (that is, no extra balls are added). But if you don't, then the new balls begin to get in your way. If, say, these form a line right across the board, then you won't be able to move balls from one side of this to the other (there has to be a free path for the pieces to travel where you want). And of course you may sometimes find you've built up a neat line of four balls, only to find one of the new additions drops just where you were going to add a fifth.

Like all the best games, then, Lines95 has very simple rules, but mastering them can be a real challenge, and one requiring a great deal of thought. It can also be very frustrating, particularly in the end game, when you sometimes find every move you make gets blocked. But even then we still wanted to click New and start again, and you can't expect any more from a game than that.

Please note, on one system we did notice a possible bug relating to the audio, where for no apparent reason our entire PC sound would disappear in the middle of a game. This may be related solely to some specific conflict on that computer. But if you have something similar happen to you, don't worry. You can probably restore your audio just by restarting the Windows Audio service (run Services.msc, scroll and double-click Windows Audio, click Stop, wait until it stops, click Start). If that doesn't help a system reboot will bring everything back to normal, and turning the sound off (Game > Options > Sound Off) should prevent the issue occurring again.

An interesting game which takes a couple of minutes to learn, but considerably longer to master.