Wirelessly sync your iTunes library to your Android device 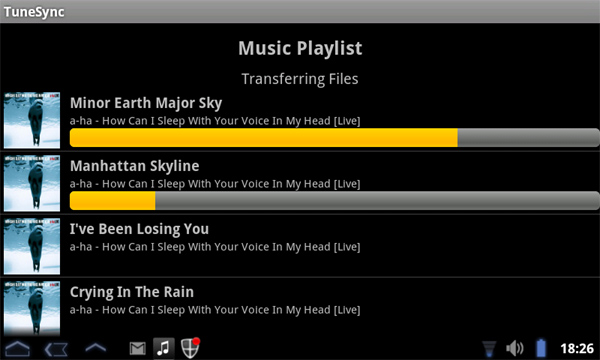 Jealous of the fact iPod, iPhone and iPad users can now sync wirelessly with iTunes? If you’re an Android user, you need be jealous no more. TuneSync is a two-part solution to the problem of getting your iTunes music and playlists across to your Android phone, tablet or media player without having to first plug it in and then use a tool like Notpod to perform the sync for you.

The first part of the TuneSync solution is this: the server software you install on your Windows PC or Mac. Once installed, it’ll sit there ready to go. Now all you need to do is download the Android application and you’re ready to start wirelessly transferring from computer to Android device.

Unfortunately the Android app isn’t free, but you can at least give it a trial run using the (extremely) cut-down TuneSync Lite, which allows you to sync up to 20 songs for one playlist. If you like what you see, you then uninstall the Lite version and purchase the full version for $5.99.

In theory TuneSync is the perfect matchmaker between Android and iTunes, and when paired with a Windows machine works well. Mac users reported problems with a recent build for OS X, which we too had problems with, but a new, updated build (v2.0.9) appears to have resolved those issues. There are still some issues with slow performance when re-syncing updates - the advice is simply to be patient while TuneSync gets itself in order before continuing to transfer new files across, but it's still a frustrating experience that ultimately counts against it.

Works effectively once it gets going, but sluggish performance when re-syncing and some compatibility issues with Honeycomb tablets prevent TuneSync getting a higher rating.

Sync music from iTunes to any MP3 player or phone

Add or remove music directly from your iPod, iPhone or iPad without using iTunes