Boot ISO images without having to burn them to disc first 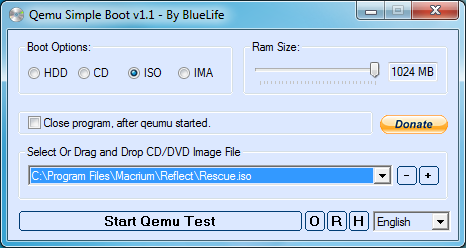 Qemu Simple Boot is a portable virtualization tool which allows you to boot an ISO image in a window on your desktop, without having to burn it to disc first.

The program really is very simple, and you'll probably only need to apply three configuration steps. Choose your ISO image; select the amount of RAM you'd like to allocate to it, and choose "ISO" in the Boot Options section (conveniently, Qemu Simple Boot supports IMA and IMG images, too).

With that done, click "Start Qemu Test", and the program will use the Qemu emulator to effectively create a virtual machine, booting your image and displaying what happens in a window.

Does it work? That depends. We wondered if Qemu Simple Boot would let us run Ubuntu 12.10 in a window, for instance, and pointed it at the ISO file. Then waited for more than five minutes as hardly anything happened, before eventually Ubuntu crashed with an error message.

When we gave the program an easier time, though, it was a very different story. We tried launching Macrium Reflect's rescue CD ISO file, for example, the main screen launched within 40 seconds, and it all worked just as it should: no problems whatsoever.

If you need to be able to boot just about any ISO file, then, we'd much prefer VirtualBox. It's an order of magnitude faster, and far more configurable.

Qemu Simple Boot's portability is a plus, though, as it means you can boot ISOs on other people's PCs without having to install anything at all. If that appeals then we'd give it a closer look.

Compact, portable and easy to use, Qemu Simple Boot can launch bootable ISO files with the minimum of clicks. Performance is a major issue, though - it's seriously slow.