Add a realistic "falling snow" effect to your PC 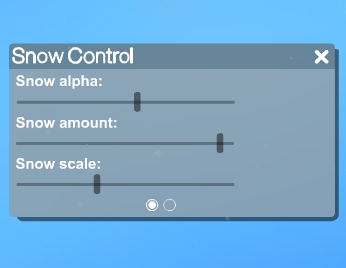 Desktop Snow is a simple tool which adds falling snowflakes to your desktop.

The effect is surprisingly realistic. This isn't one of those apps which just takes multiple cartoon-like snowflakes, all the same size, and drops them down the screen at a fixed rate. These flakes are different sizes, each with their own transparency. They fall at different rates. They're blown around by the breeze. Desktop Snow may be a very trivial app - okay, it is a very trivial app - but the effect is well thought out and impressively designed.

The snow isn't intrusive, either. Unlike similar programs, the snow isn't always falling on top of other applications; you only see the effect when Desktop Snow is the active application. So if you switch to Desktop Snow then you see the snowy effect, but if you Alt+Tab to Outlook (or wherever) to do something important, all such distractions disappear immediately.

In theory, at least, you can also tweak the snow effect, adjusting details like quantity, flake size, wind speed and more. But on our system this didn't work, at all. Once we clicked a slider, it moved backwards and forwards, even when our mouse wasn't touching it any more. And none of the tweaks seemed to have any influence on the final effect, anyway.

The configuration options didn't work at all for us, but this still provides a very realistic snow effect for your desktop.

An animated Christmas tree for your desktop

Add a string of Christmas tree lights to your desktop