Control your mouse cursor from the keyboard 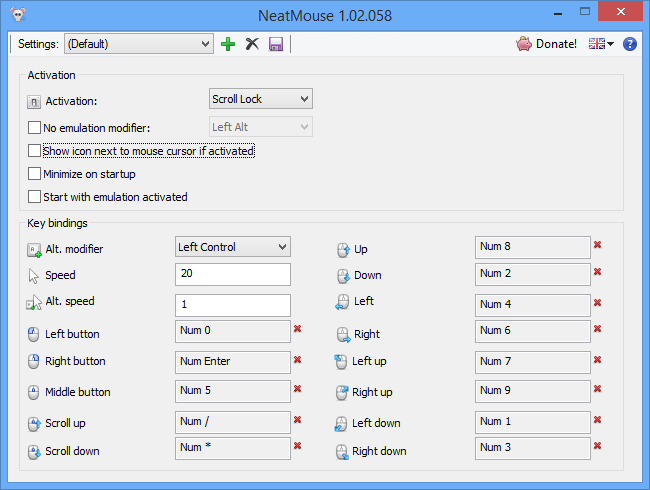 NeatMouse is a small tool which enables you to control your mouse cursor from the keyboard, perhaps useful if your mouse isn't working (the battery has died, maybe) or you need pixel-level precision.

The program allows you to move the cursor up, down, left, right or diagonally, as well as emulating left, right or middle-clicks. By default this is all controlled from the numeric keypad, but you can reassign the hotkeys to whatever works best for you.

Windows can do something similar without needing to install any third-party software, of course (Control Panel > Ease of Access Centre > Change how your mouse works > Turn on Mouse Keys), but NeatMouse is far more configurable, and has several extra touches. It can simulate the scroll wheel, for example; you can have the program display an icon when it's activated; and support for two mouse speeds means your cursor can move rapidly most of the time, but then drop to one pixel at a time when you need more precision.

The price you pay for this is a rather bulky configuration dialog (check the grab), but once set up you won't have to look at it again, and in our tests the program generally worked well.

Use a single mouse and keyboard to control multiple computers

Control your PC remotely via your Android mobile or tablet

Configure your Microsoft mouse and keyboard for Windows 8

Archive and search all your documents