View a host of regular and special calendars 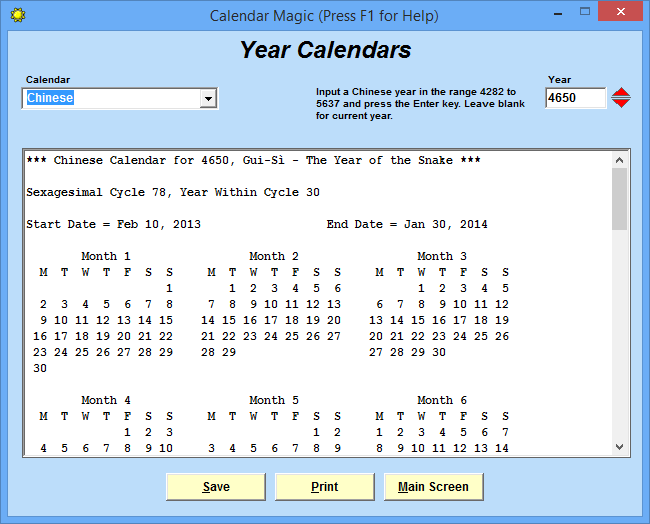 Most of these functions do far more than you might expect, too. For example, you don't just have an option to view the Egyptian, Vietnamese and any of 26 calendar systems: the program can also display a month-by-month, side-by-side comparison of any two of these.

Similarly, the "This is your life" function doesn't just display the day of the week when you born. It also tells you the number of days you've lived, the day of the week for your next birthday, your Chinese birth sign, your Thai birthday colour, your Islamic calendar age, and your date of birth in all the supported calendar systems.

Calendar Magic includes a host of calculators. A few are time-related, for example giving you the number of days between any two dates. But the rest cover topics like geometry, statistics, fractions, factors and prime numbers. Some of these - the Scientific and Expression calculators, perhaps - are significant programs in their own right.

The final "Other Utilities" section has even more conversion tools and calculators. The highlight is probably the Unit Converter, which supports conversion of units in more than 80 categories (acceleration, area, capacitance, flow rate, length, distance, mass and more). But as usual, Calendar Magic piles on the extras, and you also get everything from a BMI tool to a pregnancy calculator.

Enhancements and improvements in V18.9 are listed below.

Daylight Saving Time (DST)
Added a new menu item (Dates > DST Dates). For countries using DST in the current year, this menu item will generate a list of the countries and the DST begin and end dates for each country.

Calendar Magic's world wide locations database has been updated to reflect these changes.

Big Numbers Calculator
A new Mersenne prime number has recently been discovered, the 49th such number, and the Big Numbers Calculator now supports its evaluation. The new prime has the form 2274207281 - 1 and contains over 22 million digits (22338618 to be precise). Expect its evaluation to take days rather than hours. Also forget any thoughts about calculating the corresponding perfect number!

Made some changes to the underlying program code to speed up the calculation of the square roots of very large numbers.

At the request of a user, added an Expression Calculator saved history file to convert from kilograms to stones, pounds and ounces. UK citizens of mature years still tend to think of weights in terms of these older imperial units. An equivalent file has also been provided for converting in the other direction.

Hindu Religious Festivals
The 2016 to 2018 dates for the Hindu religious festival Maha Shivaratri were out by one day. All three have been corrected.

The interface is a little basic and we experienced one or two technical glitches, but for the most part Calendar Magic worked very well. It's a great program with a huge number of date and math-related features; there really is something here for everyone.

Keep track of your appointments with this unobtrusive Mac calendar tool

Find out what happened on this day in history