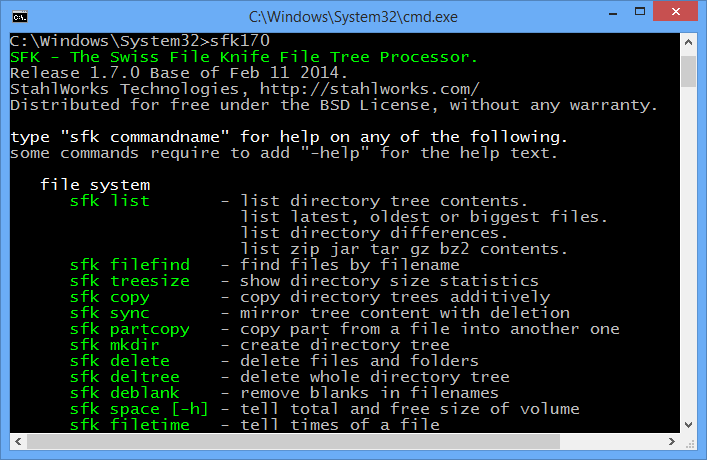 Swiss File Knife is a supercharged command line tool which crams around 100 functions into a single executable.

Most of these commands deliver far more than you'd expect. The List command doesn't just list files in a directory tree, for example: it also supports a host of archive formats. And it's enormously flexible, with more than 35 switches, which can themselves be combined in many different ways, and have their output passed on to other Swiss File Knife commands.

There's also plenty of scripting support, with tools to get user input, run sequences of Swiss File Knife commands, run commands on every file in a folder, run commands in a loop, and more.

Perhaps most surprising of all, though, Swiss File Knife isn't too difficult to learn. There's a lot to explore, but the syntax of each command is relatively straightforward. When listing files, for example, there's no "-n -l -p" garbage: instead you'll use switches like -time, -hidden, -sort, -minsize, -maxsize and so on. You can probably guess what they do already. And if you can't, a truly excellent PowerShell-like local Help system explains all.

An amazing collection of powerful command line tools. Use some individually, string others together in scripts, it's your call. If you make even occasional use of the command line, then go grab a copy of Swiss File Knife right now.

Dragon Search for iPhone and iPad 1.3.0