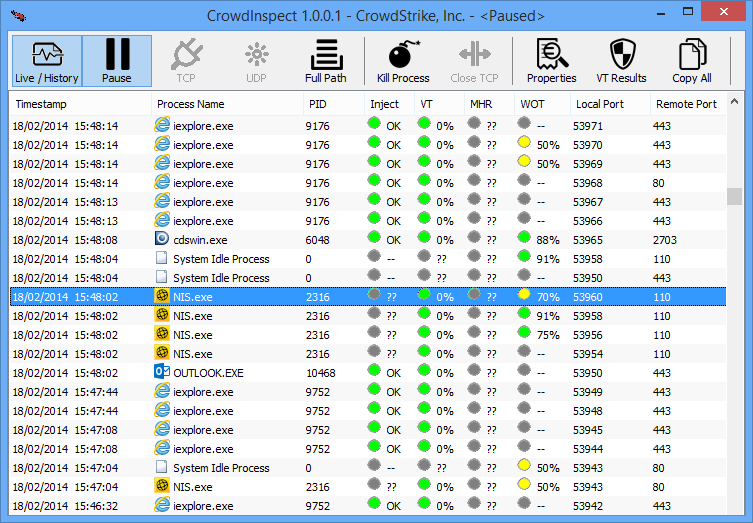 CrowdInspect is a portable tool which uses VirusTotal, Web of Trust and Team Cymru's Malware Hash Registry to reveal malware which is currently active on your network.

The program is free and very easy to use. Download, unzip and launch CrowdInspect and a table lists every running process with its name, ID, network connection type if any (TCP/ UDP), local and remote ports, IP addresses and more.

Further columns display the VirusTotal and Malware Hash Registry verdict on each process. A WOT column highlights any untrustworthy domains they might be accessing, and an "Inject" column warns you if code injection has been detected for a process (which could be a sign of malware).

If you need to know more about a particular file, then CrowdInspect can display a link to the full VirusTotal report, as well as the Windows Properties dialog. And if you believe you've spotted a problem, then there's an option to kill a particular process. But that's about it: CrowdInspect may be able to highlight some malware, but getting rid of it will require another tool.

CrowdInspect provides an easy way to check your system for malware. Keep in mind that it can't remove anything, though - you'll still need a good antivirus program to do that.

Move up to Windows 10 Professional for just $39.99 and tap into the benefits of Hyper-V virtualization