Compress your JPEGs by up to 20% 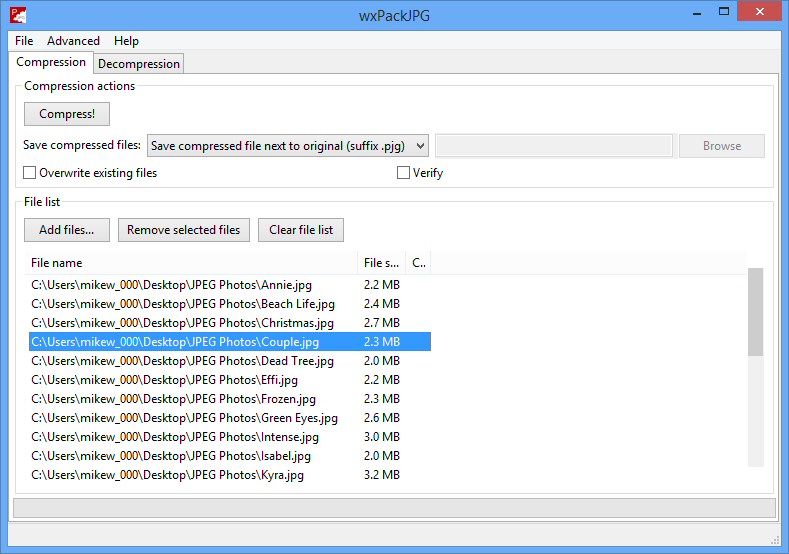 JPEGs are difficult to compress. If you need to archive a large number then you could try placing them in a zip file, but you probably won't save more than 5%. Sometimes the archives can be larger than the originals.

WxPackJPG uses a smarter technique (via the tool PackJPG), optimised for JPEGs, to deliver much better results. The developer claims compression rates of up to 20%, and while we saw a maximum of 16%, that's still very impressive. Especially as the program isn't resizing images, tweaking image quality or anything else. This is true lossless compression.

WxPackJPG is easy enough to use. We pointed the program at our test files, clicked "Compress!", and it converted them to the compressed PJG equivalent. And you can import PJG files to restore them, in much the same way.

One issue is that, when viewing a PJG file in Explorer, you won't see a thumbnail of the image itself. This could be a problem if you're hoping to find one image amongst many. But wxPackJPG 1.1.0 helped a little by adding a Preview option, so if you open all your pictures in the program then you can at least view any of them without having to manually decompress it first.

These are small points, though, and on balance wxPackJPG does a great job. It's significantly better at cutting JPEG file size than standard techniques, and if you need to archive a large JPEG library then it could be very interesting.