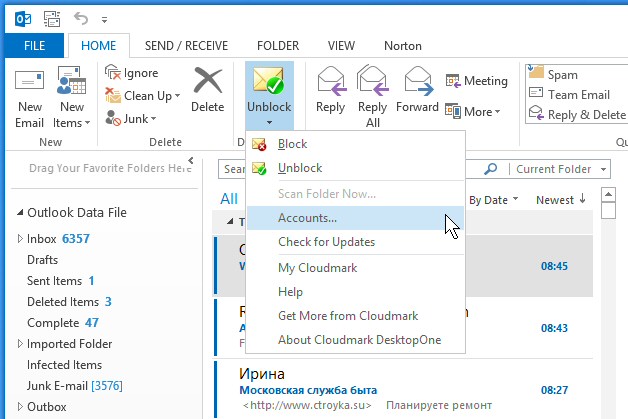 Cloudmark DesktopOne is an excellent free/ commercial spam filter which works with Outlook 2010/ 2013 (2011 on the Mac), Windows Mail, Outlook Express, Thunderbird 3+ (17+ on the Mac), Exchange accounts, and any web mail account that supports POP or IMAP.

We installed the program on a Windows 8 system with Outlook 2013 installed. DesktopOne added an icon to the system tray, and this can be used to add the email account you'd like to be filtered. (Note: the free version can add a single account only, while DesktopOne Pro supports as many as you need.)

We added our Outlook installation, and a configuration dialog helped us decide how spam should be treated. By default it's moved to the Spam folder, but we could have it moved to the Deleted folder, some other location, or (in the Pro version) deleted permanently. It could optionally be marked as "read", or "low importance", and we could have DesktopOne purge it permanently after a certain number of days.

With our configuration complete, DesktopOne began to work immediately, stripping out junk just as soon as we next launched Outlook 2013. If the program misses something then you can train it by selecting the offending message and clicking the new "Block" button on your ribbon; it'll be despatched to the Spam folder and hopefully DesktopOne will recognise any similar emails next time.

Just as with any other spam filter, DesktopOne occasionally raises false positives, flagging legitimate messages as junk. Pro users can reduce the chance of this by telling the program to trust email from anyone in your address book, and there's also a separate whitelist of "Approved Senders": manually add addresses here and their emails will never be filtered.

Once we'd spent a week or two setting the program up to handle our regular emails, though, there was really nothing else to do. Cloudmark DesktopOne typically detected and blocked around 90-95% spam, as good as you'll get from a free program. And although it did also raise some false positives, these could be rescued from the spam folder as long as we checked it occasionally. They were only ever commercial mailing lists which we wouldn't have missed, anyway; personal or genuinely important commercial messages - eBay alerts, say - always got through.

Please note, DesktopOne initially installs as a free version, and as we've described, this has various limitations: filtering is restricted to one folder and one account; you can't have the program automatically trust emails from senders in your address book, and there's no email support. There's still enough power to make it useful, but if you want more then the Pro build lifts these restrictions for $19.99 a year.

In our tests Cloudmark DesktopOne proved easy to configure and use, and detected and blocked 90-95% of spam, while blocking only a few legitimate messages (and even then, nothing we'd miss). It's probably the best free spam filtering engine we've seen.

Protect your PC from online threats with this free security suite

Everything you need to stay safe online – VPN, antivirus, malware protection, and much more

Everything you need to stay safe online – VPN, antivirus, malware protection, and much more

Everything you need to stay safe online, for free – basic VPN, antivirus, malware protection, and more