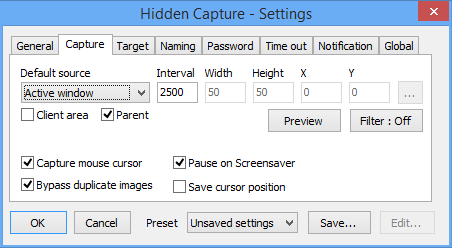 Hidden Capture is a free tool for automatically taking screenshots of your system at regular intervals.

The program is semi-stealthy, running in the background with no system tray icon or other visible interface, so could be used to monitor the activity of other users. It's visible in Task Manager, your installed programs list and (by default) on the Start Menu, though, so technical users can find and bypass it without difficulty.

Hidden Capture's major strength is its configurability. You're not restricted to copying the full desktop, for instance: the program can grab the active window, the element under the cursor, the area around a cursor, or maybe some fixed area of the screen.

By default captures are taken every 2500 milliseconds, but you can also adjust that, choose the capture format (JPG or PNG) and define how the file should be named.

Your capture source can be changed on demand with a hotkey, while another - Ctrl + * (on the numeric keypad) - stops and starts recording, but you can alter these hotkeys to whatever you need.

There's also password protection to reduce the chance of other users playing with your settings, and again you get a lot of control over how this works.

What you don't get is any documentation. This isn't a critical problem - the default settings work reasonably well - but expect to spend some time experimenting before you figure out how best to use the program for you.

Hidden Capture is a very configurable screen capture tool, but a lack of documentation means it'll take longer than you might think to figure out how everything works.