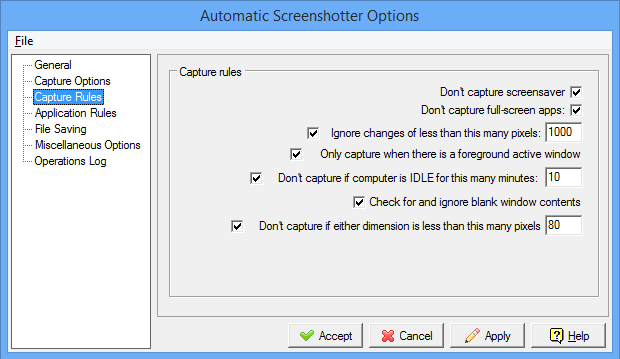 Automatic Screenshotter is a portable tool which saves images of your desktop at regular intervals.

The basics of the program work much as you'd expect. It adds an icon to your system tray, you use this to choose a capture frequency, then to start capturing, and the program begins to save PNGs of your desktop.

Automatic Screenshotter uses various rules to ensure it's saving only the most relevant images. By default it won't capture the screensaver, for instance. It pauses if the computer has been idle for a while. It analyses the image, and doesn't save grabs of blank windows, or images which haven't changed since the last one.

You can optionally tell the program not to capture particular applications, or only to capture others.

Worried about disk space? Not a problem: you're able to set a maximum number of screenshots to save, or to tell the program to delete screenshots after a defined number of days.

And the tweaks keep coming. If you're concerned that a lengthy capture time won't record the details you need, for instance, there's an option to also "capture whenever the active window changes". Enable this and Automatic Screenshotter records application changes as they happen, regardless of its next scheduled capture time.

Automatic Screenshotter's vast configurability helps you minimise the number of captures it takes, saving resources and making it simpler to search and analyse them later.