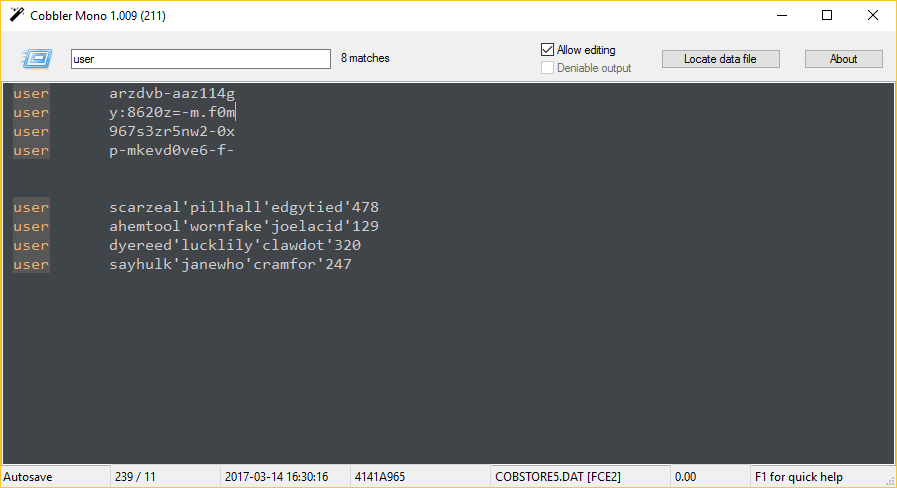 Cobbler is a tiny portable utility which stores plain text notes - passwords, bank details, whatever you need to keep private - in a secure and encrypted file.

Launch the program and you're prompted for a master password. Enter something secure and a basic editor appears where you can type your logons, account numbers and more.

There are hotkeys to create long and short high-entropy passphrases, such as "nanolug'nodruth'giveprom'077" and "$m3n+4:jvcv+$6", perhaps making the program useful as a password generator.

A simple Find tool locates and highlights the text you specify. Press F3 to jump from one instance to the next.

Pressing F1 toggles a Help panel with a few more small features and hotkeys (Ctrl+1 copies the first field of the current line to the clipboard, Ctrl+2 copies the second field, and so on.)

There's no "Save" button. Cobbler automatically saves your file as you work or when the program closes, encrypting the file using AES-128-CBC for high-grade security. Just reopen the file later and enter your password to carry on where you left off.

By default Cobbler stores its data in the same encrypted vault each time, but pass it the path of another file via the command line - or drag and drop the file onto the program - and it'll work with the new target instead.

There's nothing advanced here, at least in terms of the interface-- Cobbler is just about maintaining an encrypted text file, and nothing else. But that's already enough to be very useful, and the developer says more features are on the way.

A Notepad replacement with something for everyone