Record videos of your desktop 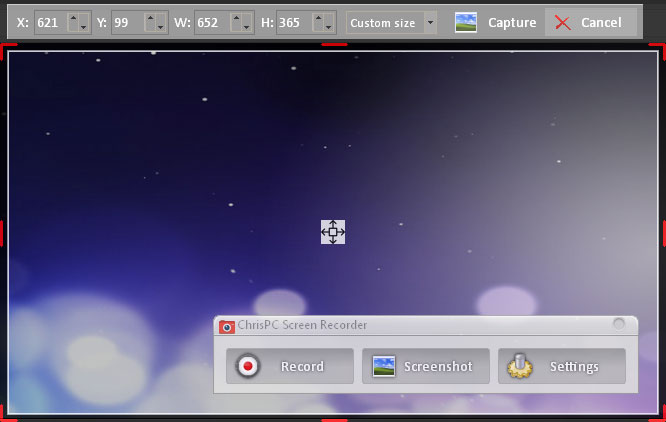 ChrisPC Screen Recorder is a versatile desktop recorder in both cut-down free-for-personal-use and commercial (24.99 Euro) editions.

Both builds offer recording of full-screen, application window and rectangular areas, in windowed or borderless forms (ideal for games or video) and with audio support.

There's support for highlighting your mouse cursor and playing a sound on mouse clicks, helpful in video tutorials.

You're able to configure the video encoder, quality, frame rate, audio source ("what you hear" or your microphone), audio codec and more.

Most of this is controlled via a simple toolbar, but there are also customisable hotkeys for capture type, "start" and "stop" recording.

The main issue with the free build is you're restricted to 10 minutes recording only.

Your video also has a watermark, but this is relatively small and at the lower part of the frame. It doesn't get in the way of the main action and shouldn't be an issue for personal use.

Upgrading lifts these restrictions and gets you video trimming, the ability to set your own watermarks, free technical support, and a licence to use the program commercially.

ChrisPC Screen Recorder is easy to use and worked as advertised, with one major exception: every time we tried to record a custom rectangular area, ffmpeg crashed. We don't see other people reporting this so presumably it's partly related to our setup, but if that's a function you need, test it carefully before spending any cash on the Pro build.

- Improved support for Windows 11.
- Other fixes and improvements.