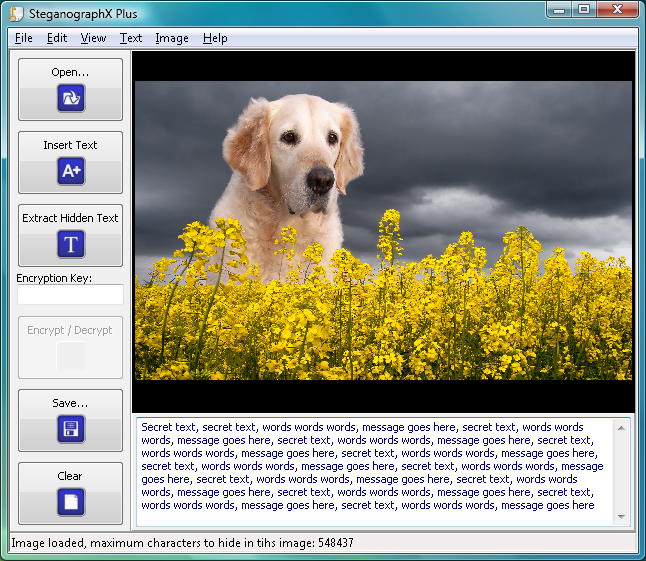 Sending confidential messages to friends, family or colleagues can be difficult. Emails are useless: they're sent in plain text and there's no telling who might read them. But encrypting messages may also be a bad idea as it can attract attention, and make it very plain that something secret is going on.

What you really need, then, is a way to send a secret message that won't actually look secret at all. Something that anyone can view, appears entirely normal, and only the recipient will be able to decode. And that's exactly what you get with SteganographX Plus 2.0.

The program uses a technique called steganography to hide text inside a bitmap image. Open a Windows bitmap file (*.BMP), type a message in the text box at the bottom of the screen, and click Insert Text, then Save. SteganographX Plus 2.0 will then split your message into tiny fragments, spread them throughout the image and save a copy of the new file.

If you then zip up the BMP file and email it to someone, then anyone who intercepts the message will just see the picture. But if your recipient opens it with SteganographX Plus 2.0 and clicks "Extract Hidden Text" then they'll see its real content, your hidden message.

And if that's not secure enough for you, it's even possible to encrypt the message before it's embedded. The recipient will then also need the encryption key to read it, a little extra insurance against your words falling into the wrong hands.

A quick and easy-to-use security tool. A pity that it only works with BMP files, though - they're huge, and using those instead of JPEGs may attract suspicion in itself

Picsel Security: exchange secret messages with others, no passwords required

Hide files in plain sight with the help of SteganPEG 1.0