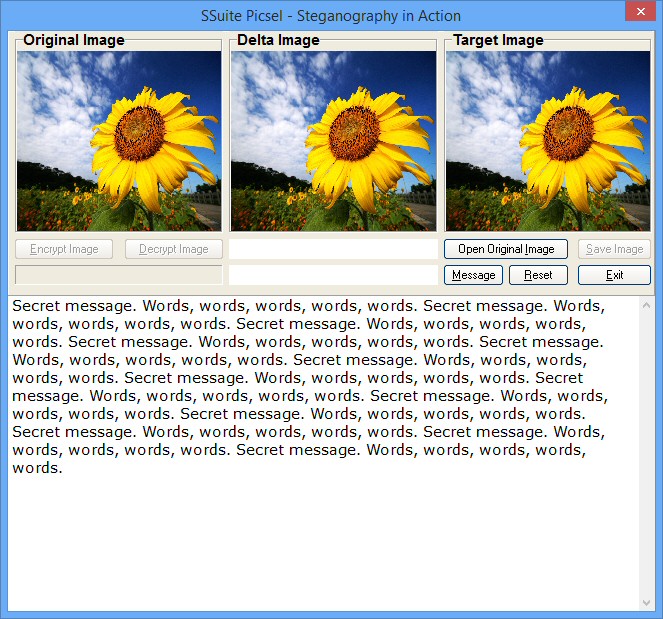 SSuite Picsel Security is a free portable tool which sends encrypted messages to someone by embedding them in an image. It's a familiar idea, but this program has one advantage: it doesn't require you to create or exchange any passwords.

To get started, simply open a source picture, type a text message, and click Encrypt Image > Save Image. The program saves an image which looks exactly like the original, yet now also contains your hidden words. Now you can email it, and even if someone else intercepts the message, they'll only see an apparently normal picture.

To read the message, your recipient must first open the source image in Picsel Security. That can then be used to decrypt the carrier picture - it's the password, effectively - and any text it contains will be displayed in the editor.

One small issue with this approach is that the recipient needs a copy of the source image before they can read any hidden messages. There are plenty of ways around this - you might agree to send a source image on Wednesdays, carrier pictures on Fridays, for instance - but it does require a little thought and organisation.

A more significant problem is that the carrier picture can only be saved in the BMP format. If you're hiding messages in digital photos then this will make for absolutely huge files, and may also attract attention in itself (most people will save large images as JPGs, PNGs or maybe TIFFs).

SSuite Picsel Security has some issues, then, but it's still a capable tool. The core technique works, it's easy enough to use, and you can devise workarounds for most of the problems (zipping up any BMPs before you email them, perhaps).