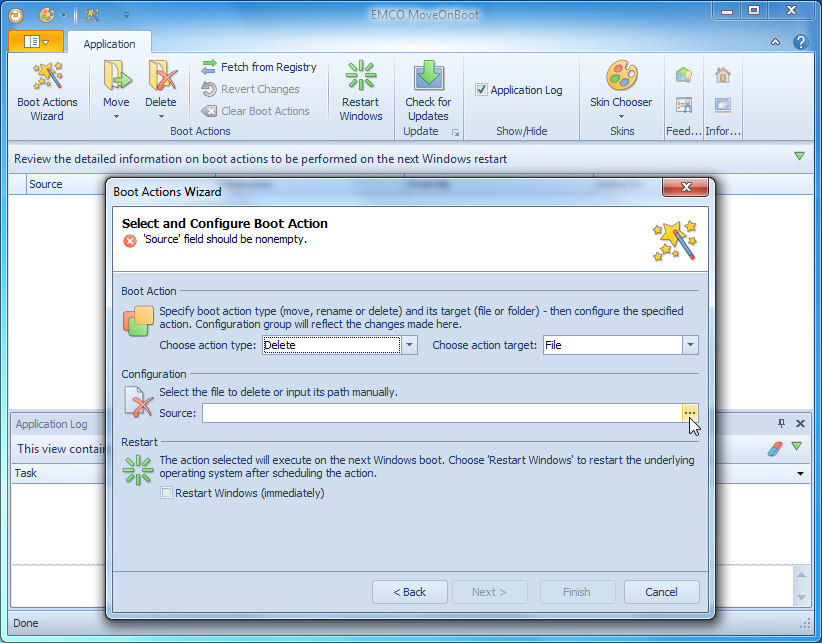 MoveOnBoot is a simple tool that allows you to move, rename or delete locked files or folders when your PC is next rebooted.

This could be very useful if, say, you've found an apparently useless file that's cluttering your desktop, but Windows gives you an error message like "Access Denied" whenever you try to move or delete it. The problem is that some program is accessing the file, so you're unable to touch it, but if you schedule a move/ rename/ delete at boot time then that's more likely to be successful.

There's also a potential security application here. Malware will often protect its own files, so even if you've spotted an infection then you may not be able to delete it. But again, MoveOnBoot can help: launch the Boot Actions Wizard, choose the malware file and opt to delete it, and after the next reboot it should be gone forever.

Be careful, though. Really careful. This "Access Denied" mechanism has some value because it stops you doing dangerous things like deleting Windows system files: they're in use, and so you can't. MoveOnBoot bypasses this protection, so in theory you could use it to delete some core Windows files, crippling your PC to the point where it won't boot (even in Safe Mode). Don't use the program unless you're positive you know what you're doing, and are 100% certain that the files you're moving, renaming or deleting aren't system-critical.

You won't need it on a daily basis, but MoveOnBoot can be very useful occasionally. It's also potentially hugely dangerous, though - use with extreme caution

Unlock files so that you freely delete, copy or rename them

Find out which process is accessing locked files

Find out which process is accessing locked files

Audit the software installed on your network from one central location

Easily collect the MAC addresses for all your networked PCs

Delete locked files when you next reboot