Manage your windows more efficiently with this virtual desktops tool 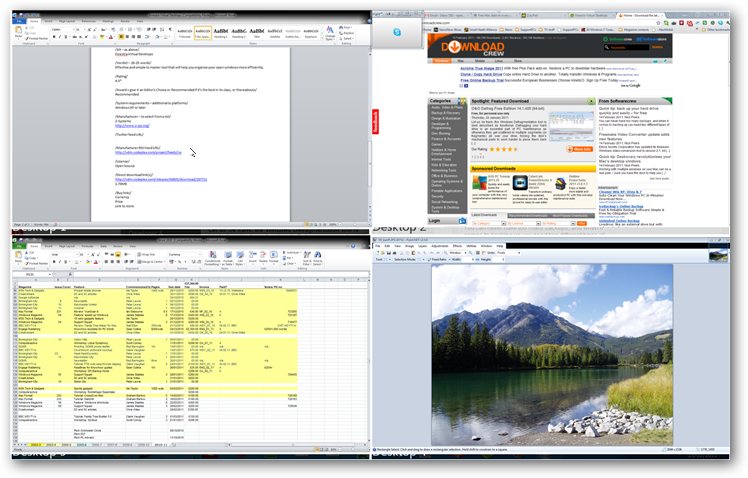 If you’re someone who regularly has dozens of windows open at the same time, you can find it difficult to manage them all. There are solutions provided by Windows – Windows 7’s redesigned taskbar with its rollover thumbnail previews is a particular help – but sometimes the problem is too big for a single desktop to handle.

If you have multiple monitors connected to your computer, you could divide your windows up between each display, but what if you’re stuck with a single display? Don’t worry, there are many virtual desktop managers that allow you to create multiple desktops that you can switch between quickly and easily.

Finestra Virtual Desktops is one such tool – it allows you to split your open programs and windows across as many virtual desktops as your PC’s memory can handle (four are configured by default), then switch directly between them with a keyboard shortcut or use the fullscreen “switcher”, which provides a preview of what’s on each window, allowing you to check what’s in which desktop before switching. Keep one window open for web browsing while another is used for work, for example.

It’s all very simple to use – once installed, launch the program and press the [Windows] + [Z] key to launch the full screen switcher: click a virtual display and the new virtual desktop will appear on-screen complete with a handy pop-up telling you which window you’re in (as well as which window you’ve come from).

One handy feature is the ability to move the currently selected window to another desktop – just hold [Win] + [Ctrl] plus the corresponding desktop number on the numeric keypad. It’s perfect for rearranging your windows as you work.

Windows 7 users will also like the fact the program integrates well with the Taskbar, complete with its own jump list and quick and easy shortcuts for switching screens, although one slight niggle is the lack of a thumbnail preview of the actual screen on the pop-up preview; instead a program icon of the currently selected window is shown instead.

Effective and simple to master tool that will help you organise your open windows more efficiently.

If your PC has trouble playing audio without regular glitches, then this program may be able to help