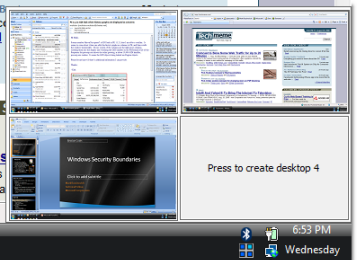 It doesn't matter how large a monitor you use, how high you set your screen resolution - the Windows desktop is never big enough. And so you're always resizing windows, minimising, maximising, trying to pick out the app you need in a cluttered taskbar.

Desktops changes all that, though, by giving you easy access to four virtual desktops. If you're running your browser full-screen, say, then want to run some other applications, you could press Alt+2, Alt+3 or Alt+4 to switch to one of the "spare" desktops. An empty desktop will appear, and you can run new apps, and arrange their windows as you like. When you want to switch back to the first desktop, just press Alt+1 (or right-click the Desktops system tray icon, click Select Desktop and choose the one you need).

These virtual desktops don't always work as you might expect. Press Ctrl+Shift+Esc to launch Task Manager, say, and it'll only ever appear on desktop #1. And most system tray icons similarly only appear on the first desktop, so you'll be pressing Alt+1 to switch back on a regular basis.

Still, it doesn't take long to learn these rules, and Desktops undeniably makes it much easier to manage your application windows. Give the program a try, see how it works for you.

It has a few quirks, but if you're always running lots of apps at the same time then Desktops could really boost your productivity

- Desktops is now compatible with Windows 10, properly supporting Winkey hotkey sequences (like Winkey+R to bring up the Run dialog) on alternate desktops and switching back to the primary desktop’s start screen when you hit Winkey.

Take control of folder and application windows in Snow Leopard

Manage your windows more efficiently with this virtual desktops tool