Easily create and edit your own Windows animated cursors 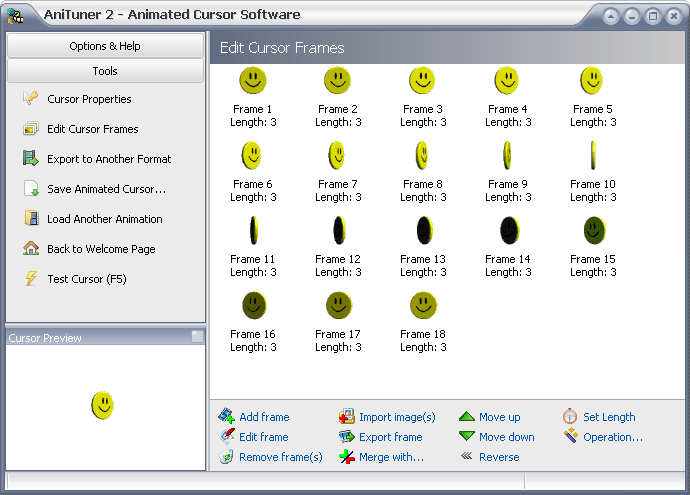 AniTuner is an interesting free tool that allows you to create, edit and generally work with Windows animated cursors.

You might use it to open an existing animated cursor, for instance, then resize it, move or resize the cursor hotspot, or edit individual frames. You can even revamp old 16 or 256-bit cursors by converting them to 32-bit and adding a semi-transparent shadow.

The program also allows you to create entirely new cursors from animated GIFs, AVI videos, BMP frame strips and more. Not every file will be suitable, and if it's not then the results can be very poor, but you don't have to install the cursor to find out: a "Test" button shows you how the cursor will look right away.

And AniTuner's handy Export option gives it a whole new dimension, by allowing you to export anything it's loaded as an animated GIF, AVI video or Flash animation (SWF). So even if you've no particular interest in cursors, you could use the program just to, say, convert them into animations for your web page.

Despite all the help, some dubious design decisions mean AniTuner isn't always as easy to use as we'd like. Still, there's a lot of power here, and the support for animated GIFs, AVI videos and Flash files mean the program has a lot of animation applications

Create spectacular morphing animations with the minimum of effort