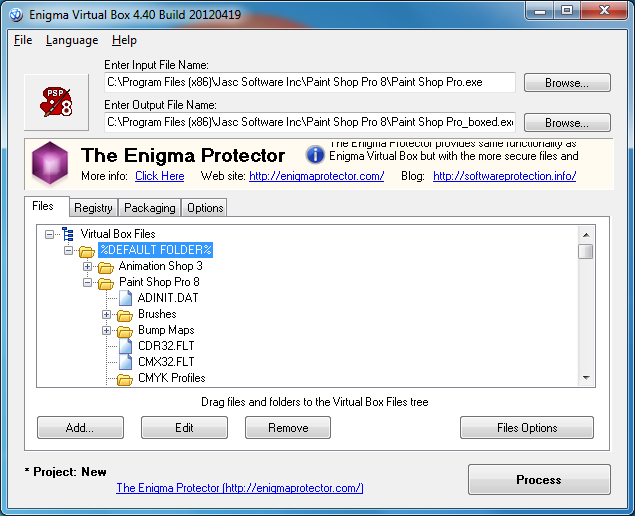 Enigma Virtual Box is a powerful tool which can combine all the files used by an application into a single module.

Why bother? If you can replace host of files and folders with a single executable then obviously that's going to be more convenient. But the real benefit comes if you're concerned that others may steal your hard work. Normally people will be able to browse an installation and examine or take whatever files they like: images, audio files, videos, DLLs, OCXs and more. But here they'll all be compacted into a single module, and not even extracted to your hard drive at run time (the unpacking occurs in RAM), so your software will be much more difficult to examine.

The program is surprisingly straightforward in operation. You need to point Enigma Virtual Box at your application folder, and its core executable file, and - well, that may be enough. We pointed it at an old copy of Paint Shop Pro, just because this behaves a little oddly and we knew it would be an interesting test.

Only a few moments later, though, Enigma Virtual Box had taken all the program's DLLs, data files and other bits and pieces, compressing them into a single executable. We clicked Run to try this, and it launched faultlessly; performance was just a little below normal as obviously there was some unpacking to do, but it was still very acceptable.

There are other options available if you need them, though, including optional Registry virtualisation, making this an excellent way to protect your software investment.

The authors also produce a more powerful commercial Enigma Protector build, though, which adds additional layers of security to prevent your code from being analysed. Find out more at the product site.

Easily package your portable apps with this effective installation tool